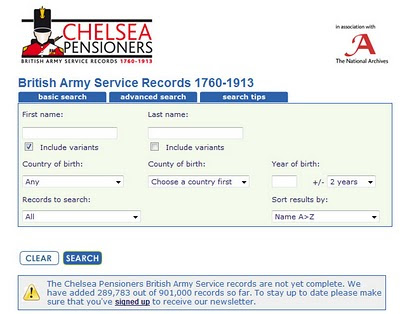 The screen above shows the search screen that users are presented with if they wish to search the British Army Service Records 1760-1913 on Find My Past.

Searching this category is NOT AVAILABLE as part of the trumpeted FREE Trial. So if you were hoping to have a fortnight's freebie (as I was) forget it. 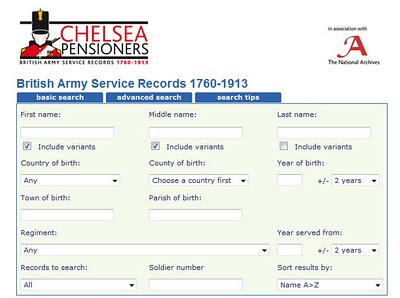 At first glance there doesn't appear to be the facility to search by regiment. However, it is there, it's lurking behind the advanced search tab (above). Click on the regiment and you're presented with drop-down options. Some regiments though, are missing. Where, for instance is the South Yorkshire Regiment, the predecessor of the King's Own Yorkshire Light Infantry?

I ran a search on men who'd joined the The Scots Guards in 1882. The results (below) are useful in that they show where the men were born - and therefore give some indication (for the most part) where men were recruited. However, the omission of the man's number is a serious flaw. I'm a number cruncher. I like army numbers - see my Army Service Numbers blog - and not being able to see these here makes it unlikely that I'll use the service. 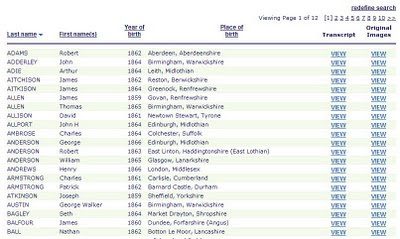 Also, as far as value for money is concerned, Ancestry wins hands down. Find my Past will sell you a bundle of 60 credits for seven pounds. That will buy you access to a measly ten records or so. That's probably enough for an occasional researcher but a serious military historian is going to have to cough up 150 quid for a year's subscription (or ninety-five pounds for six months).

Nevertheless, WO 97 is a fantastic military resource, and a real feather in the FMP cap.
No comments:

Email ThisBlogThis!Share to TwitterShare to FacebookShare to Pinterest
Labels: Find My Past, Pensions, WO 97

Find My Past has just released the first batch of pension records from the WO 97 series at the National Archives. The series contains approximately 700,000 records of soldiers who were discharged to pension between 1760 and 1913 and is a major collection.

The first 250,000 records have been released and others are currently being scanned. Here are the details:

Also known as the Chelsea Pensioners' records, don't let the title confuse you. The pensions were administered through the Royal Hospital at Chelsea and the pensioners themselves were not necessarily in-pensioners at the Royal Hospital. Click on the link below to start searching the database.

Email ThisBlogThis!Share to TwitterShare to FacebookShare to Pinterest
Labels: Chelsea Pensioners, Find My Past, WO 97

Daddy, what did YOU do in the Great War? 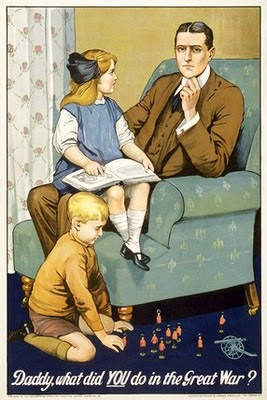 Find out by visiting Ancestry.co.uk. FREE 14 DAY TRIAL. Tens of thousands of service records from the 1850s through to the 1920s.
No comments: