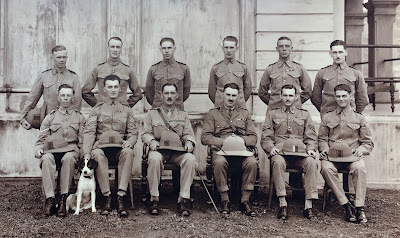 Here's another recent eBay purchase. The men are all named as follows:

With all of these things, an element of detective work is necessary and in this case I started with the officers.

Major A F Day is possibly the same captain and quartermaster A F Day whose promotion to major (and quartermaster) took place on the 10th February 1947. He could also be the same Lieutenant A F Day who was interned in Holland on the 29th December 1917 and repatriated on the 21st January 1919.

Captain L G Butler MC is Captain Leolin George Butler who was promoted captain on the 14th November 1926.  He was born in Bristol  in 1893 and his death was registered at Weston-Super-Mare in 1986. In 1911 he was working as a civil engineer for a ferro-concrete engineer. He was commissioned as a second lieutenant with the Wessex Divisional Engineers on the 10th October 1915.

There is a variety of medal ribbons on display. Captain Butler's MC is clearly visible, so too his British War and Victory Medal ribbons. Signalman Field wears a 1914-15 trio; Major Day could be wearing Boer War ribbons; Sergeant Ricketts and Corporal Effland both look as though they are wearing ribbons from the second world war.

So where was the photo taken? Somewhere tropical judging by the helmets. And whilst we're at it, what about those helmets? Is that Royal Artillery on the left and Royal Engineers on the right? As for a date, I'm going with post Second World War. I welcome further thoughts on this photograph.

This was a nice discovery for me this morning; a website dedicated to the 25th Battalion, Royal Fusiliers. I don't have a particular interest in this battalion but I had just finished a research project on a man who served with the 25th and then stumbled upon this website. I would suggest that this is probably essential reading for anyone with an interest in this particular battalion and it looks well-researched. There are also transcripts of the battalion war diary which is an incredibly useful bonus.

Well done to Steve Eeeles the owner of this website and for whom the research must have been - and probably still is - a true labour of love.