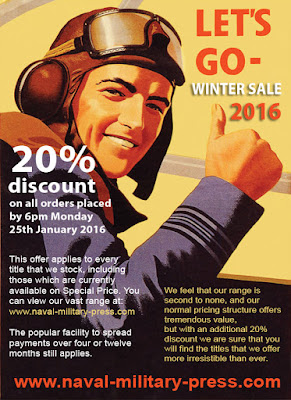 Forget Next, John Lewis, Blah-de-blah; this is the sale that matters. Naval and Military Press already offer some great deals on hard-to-find books and now you can save an additional 20% on all orders placed by 6pm on 25th January 2016.﻿ 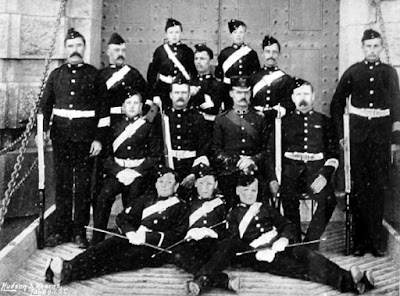 The photo above was first published in the Navy & Army Illustrated in its issue dated 21st August 1896. The caption underneath the photo reads, "The oldest and youngest soldiers of the battalion".

Further down it is explained that Sergeant-Major Jepson and Private Stapleton had 22 years' and 21 years' service respectively, whilst Boy Stokes had less than six months' service.

There are at least six boys in this photo and at least three of the soldiers (one of whom must be Jepson) have four good conduct chevrons on their lower right sleeve whilst three soldiers have three chevrons each. So who were these youngsters and old hands? I thought I'd try and find out.

Sergeant Major Jepson
This man is possibly Charles William Jepson who would later become Lieutenant & Quartermaster and would serve in the Boer War.
Private Stapleton
No convincing match identified
Boy Stokes
5107 William Edward Stokes, born around November 1881 and enlisted in London on the 30th March 1896 aged 14 years and 4 months. Discharged as a lance-corporal in March 1908 on the termination of his first period of engagement.

These boys may also appear in the photo.

5141 Walter Ezekiel Adams, joined in London in May 1896 aged fifteen years and six months. Discharged medically unfit in October 1898. This boy joined later than Stokes but Stokes was younger than Adams.

5157 George Millwood, joined in London on the 13th June 1896 aged fifteen years and seven months. Discharged in June 1908 on the termination of his first period of engagement. 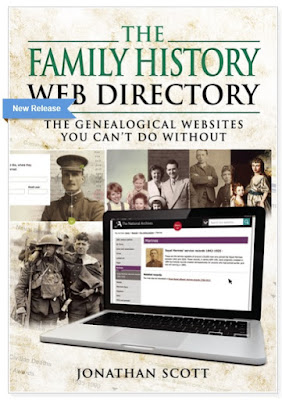 Here are some recent reviews of Pen & Sword books, published on Amazon, which readers of this blog might find of interest. Books can be obtained directly from the publisher or from Amazon. Links on this page are to the Pen & Sword website.

Title: The Family History Web Directory: The Genealogical Websites You Can't Do Without
Author: Jonathan Scott

This is an ambitious undertaking and the author and the publisher must have been aware, as soon as they embarked on this mission, that no sooner had they published the book, than it would be out of date. I suspect that this will be a regularly updated publication, and it will need to be if it is to retain its usefulness. There has probably never been a better time to undertake family history research and I say that as someone who started embarking on my own research project around thirty years ago when there was nothing on line at all (in fact there wasn't even the concept of "online"). I began the hard way, trekking up to the National Archives, calling up documents and spinning through microfilm. I completed the project many years later by accessing those same documents on Findmypast and Ancestry when I was based in India. Today, as this new book highlights, there is so much more.

I would have liked to have seen some overviews of the main commercial family history providers - Ancestry and Findmypast - with honest appraisals of those sites in terms of content, search, navigation and value for money. Force War Records, minnows in the genealogy stakes, get far too much coverage for a company of their dubious worth. Caveat Emptor. There are also some errors. Findmypast did indeed purchase Origins, but the militia attestations were never part of the Origins collection but rather licensed direct from the National Archives along with soldiers' pensions records 1760-1915. There are also some startling omissions. Where for instance is the Army Service Numbers blog (http://armyservicenumbers.blogspot.co.uk/) which has been an extremely useful resource for many? [Yes, yes, I know that this is one of my blogs, but I am continually told how useful it is and I was genuinely surprised, or at least a little piqued, to find it not mentioned].

Overall though, this is a good book and should sell by the bucket-load at fairs such as Who Do You Think You Are? I rather think though that the author has set himself a task akin to painting the Forth Bridge. 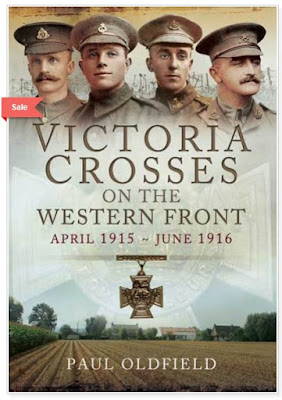 This is a weighty book packed with information. The author states that this is as much for the battlefield visitor as it is for the armchair reader, and if that's the case I would advise the battlefield visitor to buy the Kindle version. This is the second book in this particular series and follows the same format as the first volume. Details of the VC actions are explained in largely chronological order and are then followed by biographies of the winners. The actions occupy the first 184 pages whilst the biographies take up the next 270-odd pages.

There is a lot to recommend this book. Paul Oldfield obviously knows his stuff and is also quick to acknowledge the support of fellow members of the Victoria Cross Database Users Group. There are also ten pages of acknowledgements and sources, no wonder then that the actions are well-explained and the men well researched. Having been used to seeing the same images re-published again and again for a lot of these men, it was nice to see new contemporary images for many, and also to read more about their background and their families.

As you would expect with Pen and Sword, the book quality is first rate and old photos have been brought to life. The maps are also extremely useful and will be a particular boon to the battlefield visitor who can now visit the exact spots where the actions described took place. I can find nothing to fault this book. My copy will be a useful reference resource on the bookshelf at home - but I'll invest in the digital version when tramping across Flanders fields. 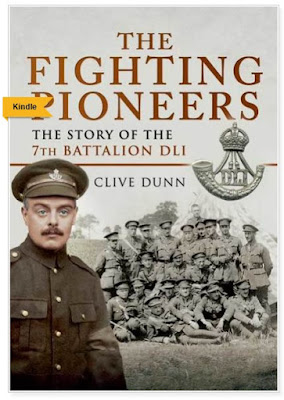 This book is up to Pen & Sword's usual high standards: a weighty hardback, nicely printed, solidly bound and, more to the point, packed full of well-researched information and photographs which won't have been seen by many before. If your ancestor served with this battalion then this book will be invaluable, particularly if read alongside the official battalion war diary.

Author Clive Dunn has used a myriad of sources to piece together this battalion's history from its origins in 1908 until the end of the war. There are accounts from the men who served as well as articles pulled from newspapers, and official sources such as published histories. A list of battalion awards, a nominal roll of men who landed with the battalion in April 1915, a roll of men known to have served in Volunteer Service Companies during the Boer War, Territorial Force War Medal recipients, and finally a roll of serving officers all provide layers of icing for this already rich fruit cake. There's also an index and a bibliography.

This is a great book that will be a very useful reference resource.
No comments: 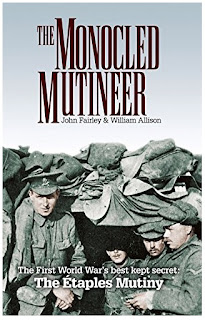 First published in 1978, nearly forty years on, this is a timely and welcome re-print of a modern classic. My own copy of this book dates to 1986 and the paperback re-print issued to coincide with the BBC drama of the same name. It tells the story of a revolt; a mutiny even, by British and Commonwealth troops at Etaples in Northern France in 1917, and the charismatic and elusive Private Percy Toplis, the eponymous Monocled Mutineer. This Souvenir Press edition contains a new introduction by John Fairley, one of the co-authors, and new epilogue. That aside, the text is largely unchanged apart from some minor updates (inckluding the curious omission of the paragraph that dealt with acknowledgements to Murray Allison, Jill Barron, Tony Timmington and Richard Cackett).

Since this book was first published, many thousands of records have become available on line, and hundreds of new books have been written that cover aspects of the Great War in enormous depth. Hundreds of thousands of men passed through the hated "Bull Ring" at Etaples and The Monocled Mutineer probably gives the best overall account of the place. For this fact alone, the book is well-worth getting hold of.

If I have any criticism it is that more could have been done to make this work more accessible. An index would have been useful, and perhaps footnotes and a bibliography. The front cover photograph of troops in the trenches is credited to the Royal British Legion but who does the photo depict and which regiment were they serving with? Such detail could have been added without too much fuss and would have made the work more complete.

Nevertheless, this book will find a new audience - and deservedly so - as we approach the 100th anniversary of the mutiny in 2017. 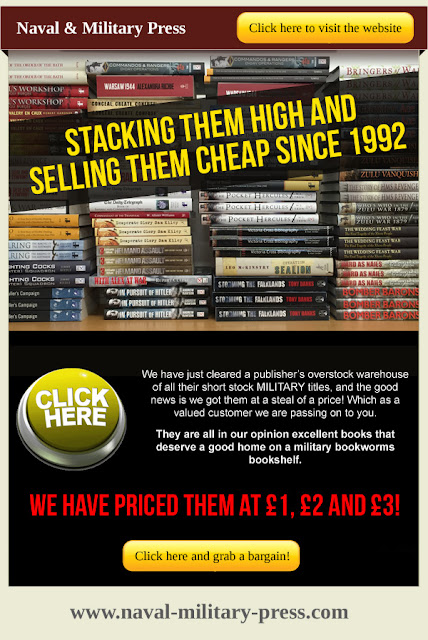 Naval and Military Press have some great bargains in this flash sale. Grab them while you can. Click on the image above or HERE to go straight to the Naval & Military Press website.﻿