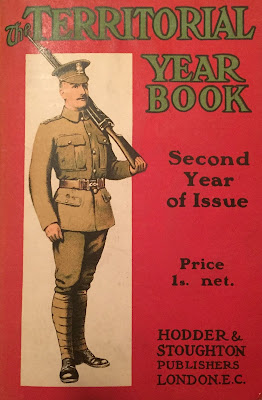 Some years ago I bought the Territorial Year Book, published in 1909. The Territorial Force, of course, came into being in April 1908, and the year book, published the following year, ran to nearly 300 pages and chronicled the birth of the new Force and published details of those were running the county associations and details about the various Territorial Force units. As a reference work of the Territorial Force at that particular time, it is unmatched. The book is also uncommon and I think I bought mine from a bookseller in Australia or the US, I can't quite remember now. I subsequently had the book re-bound in green cloth (to match the original green soft cover wraps) and it sits within arm's reach on one of my bookshelves.

This week I was fortunate enough to pick up the volume for 1910 which has 100 fewer pages than its predecessor but which nevertheless follows the same format and gives useful information about the TF in that year. In due course I may digitise both volumes which will undoubtedly increase their usefulness. 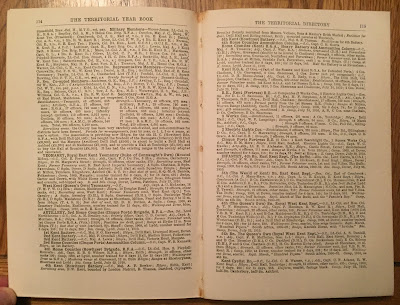 The image above is from the 1910 volume and shows the type of information recorded. This is also a rare opportunity to see part of my left thumb. 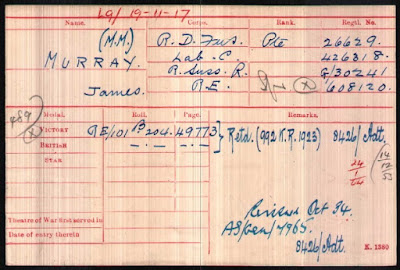 I've been meaning to write this blog post for a while. What follows may not be rocket science but because the information scrawled on medal index cards is important, I thought I'd draw attention to two of the particular annotations here.

The medal index card above is 'busy'; lots of information here concerning the regiments that James Murray served with, his medal entitlement, the award of his MM which was gazetted on the 19th November 1917, and the re-issue of these campaign medals in 1934. What I want to draw attention to though is the dates that appear in the remarks section. There are two dates here: 24/1/64 and 14/12/53. These are the dates on which an enquiry about this man's service was received by the MoD at its Hayes office in Middlesex. I don't have any background on the 1953 enquiry but I do have a copy of the response that was returned in 1964. Here it is: 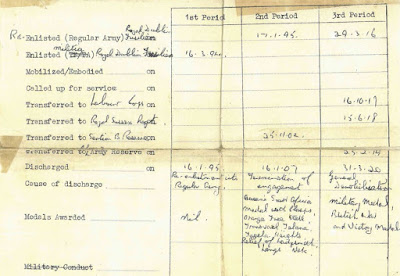 This particular response was returned on the 5th February 1964, quite a quick turnaround considering the enquiry had only been received on the 24th January 1964.

And so the first point to note is that the dates expressed thus, are the dates on which the enquiry was received by the Ministry of Defence (MoD):

The second point to note, ruefully, is that in 1964 this man's records were still extant. The information about his enlistment, transfer and discharge can only have come from an attestation paper (or similar document), whereas the entitlement to medals could conceivably have come from medal rolls. At some point after 1964 therefore, the MoD finished what the Luftwaffe had started in 1940 and destroyed James Murray's records.
No comments:

The Skinner brothers of Wimpole 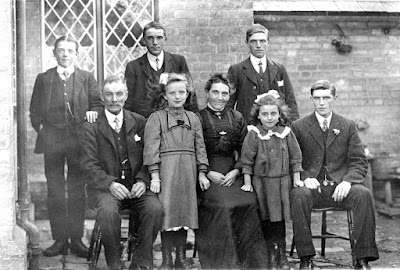 Last Saturday was such a beautiful day that we decided to pop over to Wimpole Estate in Cambridgeshire. Within the estate grounds is the Anglican parish church of St Andrews and in the churchyard, very close to the entrance is a family grave that contains the mortal remains of Charles Skinner, his wife Ellen, and two of their grandchildren.

The headstone must have been erected when Charles died in 1926, but the focus is very much on Charles and Ellen's three sons, all killed in action during the First World War whilst serving with the Suffolk Regiment. I suspect that their names were added at the same time as Charles' details, a suitable gap left between to accommodate Ellen in due course. Note too, the Suffolk Regiment cap badge at the top of the stone. 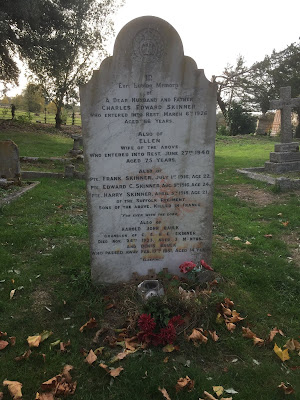 Juging by their regimental numbers, Frank Skinner joined the Suffolk Regiment in September 1914, Edward in October 1914 and Harry, who would only have been about 17 when Britain went to war, in November 1915. All three brothers were volunteers.

The photograph I have used on this post comes from Wimpole Past, a local history and genealogy site for Wimpole in South Cambridgeshire. It shows Charles and Ellen Skinner in happier times with their six children I have added this photograph to the brothers' pages on my British Army Ancestors website.
No comments: