The Militia - enlistment, discharge and re-enlistment 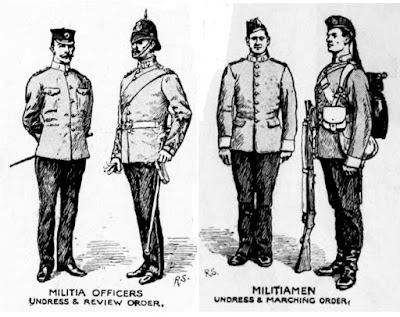 The militia was regarded by many as a training ground for the regular army but without the full-time commitment demanded of a career soldier. As usual, the Army Book for The British Empire, published in 1893, contains some very useful information on enlistment into the militia, discharge from it, and re-enlistment.

Supply of men (a) Recruits
The recruit is enlisted for six years, and for the county in which he is raised. A militiaman, if under the age of 45, may engage for a further period of four years and may be re-enlisted for a period of four years up to the age of 45. He may not be transferred to the militia of another territorial regiment without his consent, but an infantry militiaman may be removed, if required, to any other battalion of the territorial regiment to which he belongs.
(b) Discharges
On termination of engagement by purchase, on conviction of felony, and as invalids, the discharge of militiamen may be carried out by officers commanding a militia unit without reference to higher authority. Discharges for misconduct (other than felony) must be referred to the general officer commanding the district.
(c) Enlistment into other Forces
If a militiaman wishes to enlist in the army or navy during the period of his training, he obtains from his commanding officer a "conditional discharge" pending his being released from his engagement. When not up for training or drill, a militiaman wishing to enlist into the army or navy can be attested at once. 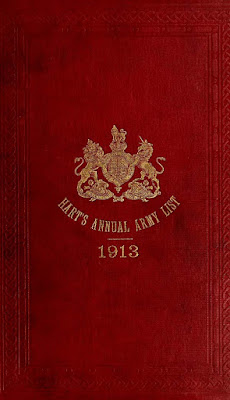 Have I mentioned lately what an extremely useful resource for military historians, the National Library of Scotland has become?

For a start, the material has been digitised to a high quality specification from original material held at the National Library. The image above is taken from Hart's Annual Army List for 1913 and there are many such volumes which can be easily accessed. Here' a list of Army Lists from 1839 to 1915, and clicking on any of the links on this page opens up further links. There are also separate sections for the Royal Navy 1913-1940 and the Royal Air Force 1919-1945.

The National Library of Scotland's War section can be accessed by clicking on the link. This then opens up a number of different categories of which the Army Lists (noted above), Rolls of Honour and military maps are arguably the most interesting.  The military maps include First World War trench maps 1915-1918 and maps of Belgium from the Second World War.

Best of all is that this is a free resource, digitised by the National Library of Scotland and made freely available to a worldwide audience.

The Nafziger Orders of Battle collection

"This collection was provided through the generous donation of George Nafziger to the Combined Arms Research Library. The Nafziger Orders Of Battle Collection contains a compilation of 7985 individual orders of battle from 1600 to 1945. It began with George Nafziger’s interest in Napoleonic Wars, and steadily grew to other areas because of the gaming public's interest in these highly detailed historical orders of battle. Sources range from published works to actual archival documents, which represent the largest single source. Nearly all orders of battle break down to the regimental level. The availability of strength figures and artillery equipment varies from period to period."

I've known about this collection for a while and was using it again this morning to look at British Army stations in the 1890s. Most of these transcripts are taken from lists published in The Army & Navy Gazette which itself can be accessed via the British Newspaper Archive and Findmypast.  The Nafziger list is useful though becuase the index and the individual PDFs are easily searchable and acan also be downloaded.

The Nafziger finding aid is here. Click on the individual links within this document to download the lists.
No comments: