Rugbeians in the Great War - Review 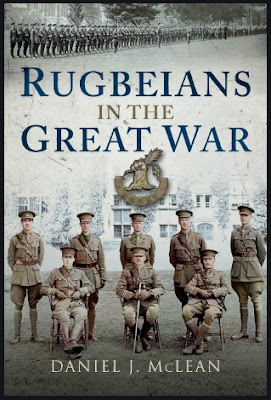 As author Daniel J McLean points out, "3,252 Rugbeians served in the Great War, of whom 687 were killed. This represents twenty-one per cent of the total, almost twice the national average."

I have a growing interest in public school contributions to the war effort and as far as Rugby School is concerned, I was already very familiar with the seven volumes of "Memorials of Rugbeians who fell in the Great War" which were published between 1916 and 1923. Indeed, most of the men whose portraits feature in those seven volumes also appear on my British Army Ancestors website. The Memorials volumes are extraordinary tributes to those Rugbeians who died in the service of their country during the First World War, and whilst this new volume from Pen & Sword draws on some of these biographies, and uses some of the photos, the scope is far wider and in places much more detailed; putting the service of individual Rugbeians into the context of the war as a whole.

There are helpful appendices and a useful index and bibliography; essentials in my book but sadly often overlooked these days. The author, a former teacher, has obviously also had access to the school archives and there are some, I'm guessing, previously unpublished photos of pupils and staff which add to the book's overall appeal.
No comments: