The prisoners of Lubin 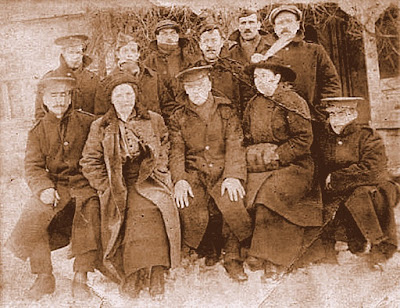 I am grateful to Grzegorz Romanski who sent me this photograph of his great grandmother and another unnamed woman surrounded by nine British prisoners of war. The men had been captured in 1914 and were sent to work on a farm in Lubin, Poland which was owned by Captain Felix Zielinski. The photo above is undated but appears to have been taken when there was snow on the ground.

Although none of the men in this photograph are named I believe two of them to be 8718 L-Cpl Thomas Lawrence Neal of the King's Own Yorkshire Light Infantry, and 9203 Pte Charles Wlbourn of the 2nd Welsh Regiment. Thomas Neal would later chair the Bradford branch of the KOYLI Regimental Association and certainly paid more than one visit after the war to visit his former 'hosts'. In April 1939, Felix Zielinski repaid the honour and visited the UK, an event that was reported in the newspapers of the time and which I re-publish below.

The first article is from the Hull Daily Mail on the 18th March 1939: 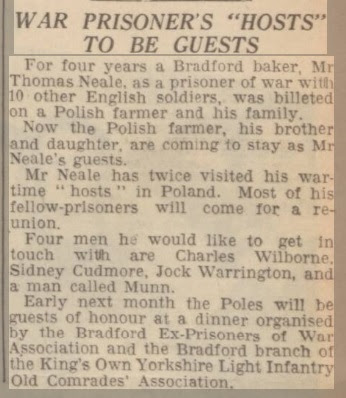 The following month, on the 19th April 1939, the Leeds Mercury published this photograph: 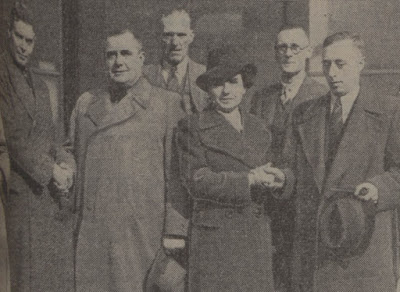 Captain Zielinski stands second left and Thomas Neal is either the man on the far left or the far right. My guess is that he is the man on the left. Madam Krzymowska, Captain Zielinski's niece is the only woman in this photo. In an article published in the Leeds Mercury on the 17th April 1939 she noted that it was Thomas Neal who had taught her English as a schoolgirl. "Her uncle", she said, "found the Englishmen good workers and faithful friends but somewhat troublesome prisoners. They were rather defiant about rules and used to play truant at night and come back at all hours."

If anyone has an ancestor who was a prisoner of war at Lubin Farm, Trzemeszno, near Mogilno, Poland during the First World War, please do get in touch. My thanks to the ever useful British Newspaper Archive for the 1939 articles.
.