Posters of The Great War

This review first published on The Great War Forum on 6th August 2013: 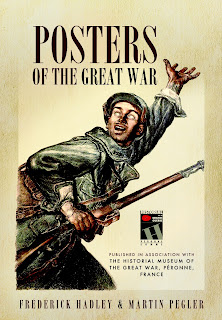 In my own personal library of military literature there are some books that I delve into time and time again and generally come away having learnt (or re-remembered), something new. Martin Middlebrook’s Your Country Needs You, covering the formation of the British Army’s divisions during the First World War is one such book whilst The Army Book for the British Empire (published in 1893) is essential (and highly readable) reading for anyone wishing to understand the late Victorian British Army. To these titles and in the category of “essential reading”, I would unhesitatingly add Posters of The Great War.

Frederick Hadley has been the curator of the Historial Museum in Peronne since 2001 and has written a number of books on the Great War. Martin Pegler, a former curator of firearms at the Royal Armouries Museum in Leeds has also written a number of books on 1914-18 and is a leading authority on the history of military sniping. Together, the two men have come up with an absolute cracker of a book which, lavishly-illustrated throughout with images from the Historial’s poster collection, is an absolute bargain at £19.99.

Chapters are arranged by theme rather than as an evolutionary run through the war years and so the reader can dip into Recruiting, Loans and Money, The Enemy, The Home Front, and so on. This is most certainly a book to be dipped into, and dipped into again and again; a coffee table book in one sense but also a fantastic reference source teeming with little nuggets. Page 57, for example displays a poster for the Charity for the devastated Somme which lists the destroyed villages and their populations. It’s an absolute gem, made even more interesting by the accompanying text which ends with this little cameo of the obliterated village of Maurepas:

“The first donations here after the war were a cow and a bicycle. For months the inhabitants had to live in abandoned bunkers and crumbling cellars. A cow provided vital milk, butter and cheese, while a bicycle allowed access to nearby markets.”

The reproductions of the posters are first class and of a standard that book lovers have come to expect from Pen & Sword. Nor is the scope of the work confined to those familiar recruiting posters that are so symbolic of the war. Kitchener and his pointing finger are here, as are the women of Britain saying “Go!” and the ashamed father having been questioned what he did in the Great War. For that matter, no book on Great War art would be complete without these posters, but there are plenty of other lesser known artworks displayed here from across the world. This was, after all, a world war, and the talented artists and their equally talented copywriters whose work is on show here, came from across the globe.

Posters of the Great War is, I would argue, an essential addition for libraries and school libraries alike and could be just the thing to excite interest in a new generation of curious enthusiasts or re-kindle a passion in those of us who have been studying the conflict for decades . As far as this somewhat wizened reviewer is concerned, I still found much to intrigue and delight and I know I shall be re-visiting this work again and again. I cannot recommend this book highly enough.
No comments: