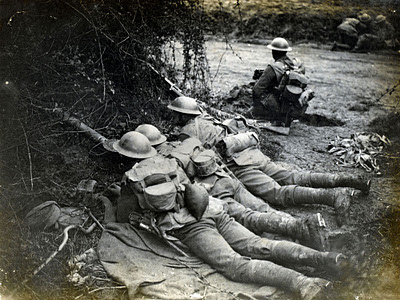 When Britain went to the polls in October 1918, and again in April 1919, the names of servicemen eligible to vote but not present in their local constituencies, were published in separate absent voter lists. An incomplete collection survives today but many lists - often found published separately in bound volumes of electoral registers - have been published online already, and many more, it is to be hoped, will follow.

Although men had to be over 21 to vote, the Representation of the People Act of 1918 allowed men as young as 19 who had seen service during the First World War, to also have the vote. This included men who had subsequently been discharged from military service and were still under the age of 21, although this was not clarified until after the 1918 election.

Ardwick - Absent Voters 1918-19
Tameside Local Studies and Archives Centre has a privately compiled list of Manchester Regiment men, all of these men from Ardwick.

Cheltenham
Loads of information on this Gloucestershire County Council website including Cheltenham AVLs for 1918, 1920, 1921 and 1925.

Cheshire
The Cheshire Record Office at Chester has a number of Absent Voters' Lists for 1918, spring 1919 and autumn 1919. The coverage is incomplete.  See Access to Archives for a full listing.

City of London
Published on Findmypast

Newcastle-on-Tyne - Absent Voters 1918
Published on Findmypast
Tyne and Wear Archives also has absent voters lists for the City of Newcastle. According to Durham County Record Office, these lists are also available at Newcastle Central Library.

Oldham - Absent Voters 1918
The Manchester and Lancashire FHS retails the Oldham AVL for 1918 on CD.  The list is comprised of 14,514 individuals along with the person's address, electoral ward and district.  Regimental details are not given.

Preston - Absent Voters 1918
According to a correspondent (for which many thanks) the Preston AVL for 1918 is available in Preston Library.

St Helens
Allegedly available at a price, although I have not located it

Walthamstow, Essex - 1918
FREE online, thanks to the efforts of the Waltham Forest Family History Society, and with a good introduction.