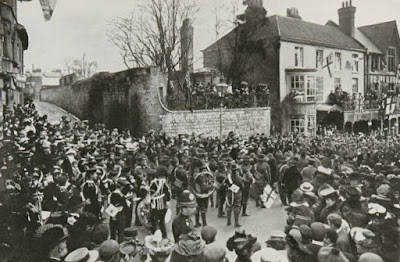 For sale, King's Royal Rifle Corps chronicles 1901 to 1920 (missing 1915 and 1919). These books are essential reading for anyone with an interest in this regiment (and worth the investment if you have an interest in British Army regiments generally). I am downsizing my book collection hence the reason for selling these now. More details here: Military books for sale.

UPDATE. These books have now all sold but there is still a complete run of Rifle Brigade Chronicles 1901-1920 up for grabs.

The chronicles that cover the First World War period will be of particular interest to anyone who is studying that conflict as they give good (summary) detail on battalion activities as well as officer casualties. The 1914 Chronicle also gives other rank casualties to November 1914, detailing those killed, wounded and missing or prisoners of war. Maps and photos of some officer casualties are included.

For those whose interest is in pre-1914, the earlier editions detail where each battalion was located at any given point in time and included reports on sporting successes, often giving names - and sometimes photos - of team members. The team photo below, for instance, shows members of the 4th Battalion obstacle team which was published in the 1907 Chronicle. All men are named and for some, this may be the only surviving evidence of their service in the British Army. For others, it will be possible to match their faces to names in service records or medal rolls; something I'll be doing in due course on my British Army Ancestors site. 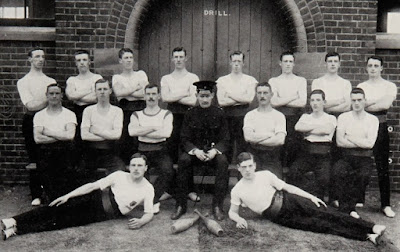 The photograph at the top of this post was published in the KRRC Chronicle for 1904 and shows the scenes in Winchester when the regiment returned to the town after the new barracks had been opened.

I came across this headed paper this morning whilst researching a soldier who had served in this cadet battalion. I was not aware of this particular battalion, although the detailed headed paper itself makes its affiliation quite clear.

Headquartered in Canning Town, the "London-over-the-border" stipulation was obviously quite lenient. Chelmsford (home of the battalion's bank) is 34 miles from Canning Town and would have seemed like the back of beyond in the early 1900s. Ingatestone is only marginally closer at about 29 miles.

The 6th Battalion, Essex Regiment was headquartered at West Ham, with A to G companies drawing recruits from West Ham, and H company drawing men from Prittlewell. There was a drill station at Grays. The man who is referred to on this paper is George Ryan who would later serve in the Royal West Kent Regiment and die as a prisoner of war in January 1917 just three days after his 18th birthday. You can see a photo of George on my British Army Ancestors website.
No comments: 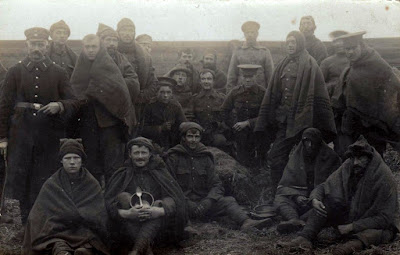 You'll find a number of research resources linked from this particular Army Ancestry Research blog, but if you have an interest in First World War prisoners of war you'll need to visit my Army Service Numbers 1881-1918 blog.

Some while ago I transcribed various lists of men held by the Imperial War Museum. These form part of a collection of lists of men who were all captured before Christmas Day 1914 and therefore missed out on Princess Mary's gift tin. Thankfully, these lists of men survive in digital format. The digital quality is not the best in the world but you'll be doing better than me if you can manage to persuade the folk at the IWM to give you access to the original documents.

I'm nearing the end of this particular publication schedule and will have posted all transcriptions by Christmas 2018.
No comments:

Online family history website, Findmypast, has just launched a handy little widget which enable you to quickly search its impressive database of 9 billion records. Included amongst these, I see, are nearly 31 million indexed military records; indexed mind you, there will be plenty of other records that have not been indexed, not to mention British newspapers as well. 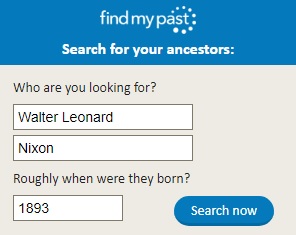 If you haven't already used Findmypast, now could be the time to do so. Just enter the basic details in the box on the right. I searched for my grandfather, Walter Leonard Nixon, who was born in 1893 and I got 530 results! Better still, my grandfather appeared in six results on the first page of results.

Go on, give it a try. Searching is FREE! 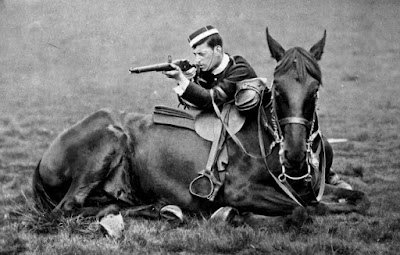 About a year ago I launched British Army Ancestors, my initiative to provide a vehicle for people to upload army photographs and so, in time, build a useful free resource for others. This week I've been adding my own discoveries and I want to use this post to talk about two of these.

Under the caption, " A dismounted Lancer at a skirmishing display" this photograph first appeared in the The Navy & Army Illustrated that was published on the 6th March 1896.  The article notes "Here we have a picture which will serve to remind many of our readers of the Military Displays at the Agricultural Hall, and to others will explain the kind of fighting which Dr Jameson's troopers made with the Boers at Krugerdorp. It is a pretty idea, teaching a cavalry horse to lie down and serve as a living screen, from behind which his rider can fire in safety, and moreover, has its use in warfare. In the present instance the dismounted horseman (Rough-rider Corporal Long, of the 17th Lancers) is one of a line of skirmishers ordered to use their carbines on foot, against an enemy whom they are unable to get at owing to the nature of intervening obstacles."

The Corporal Long in question can only be 3000 Cpl Henry Long who joined the regiment in December 1885, transferring to the 16th Lancers in November 1905. He was discharged in December 1906 having served 21 years and was entitled to the QSA and KSA for service in South Africa, as well as the Long Service & Good Conduct Medal with gratuity. His character on discharge was recorded as "Exemplary". 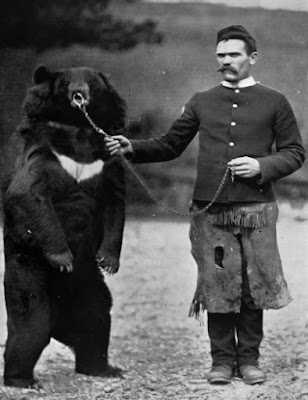 The second photo is actually quite well-known and was subsequently rendered as artwortk for a cigarette card (see below). This photo originally appeared in The Navy & Army Illustrated which was published on the 21st February 1896. The caption underneath the photo ran,
"Her mother was shot in Cashmere, eight years ago, by Prince Adolphus of Teck, who brought the cub to Lucknow, where the regiment was stationed, and gave her as a present to his troop. Shortly after this the cub was lost for a year. Then one day a man came round with a performing bear, which was recognized as " Lizzie " Since then "Lizzie" has remained with the 17th, with whom she came to England in 1889. She is a great pet with all ranks, for her own part reciprocating the affection, specially in favour of Corporal Baker, her particular guardian, who is shown in the illustration..."
I looked at medal rolls and service records for 17th Lancers corporals called Baker and the only possible candidate is 2881 Shoeing Smith Cpl Thomas Baker. In this photo, the clincher is the horseshoe, just visible on his right arm which marks him out as a shoeing smith. His service record confirms that he held that rank between July 1894 and February 1896 when he was promoted to sergeant farrier. 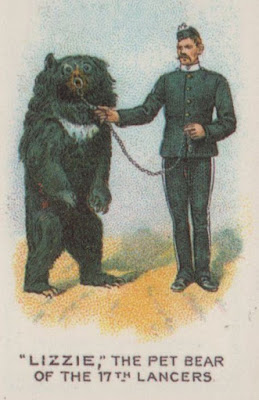 I am delighted to have identified these two men but was only able to do so as a result of understanding the regimental numbers for the 17th Lancers and, fortuitously in both cases, finding surviving records for them in WO 97.
If you've not already done so, do check out British Army Ancestors. The site is free and even if you don't want to upload photos, you can quickly and easily search over 12m records.