I've just changed the design template over on my WW1 Remembrance blog.  I'm hoping that having done so, the pages will be quicker to load and visitors will find it easier to navigate around.  One of the beauties of the new layout is that you can choose the way you want to view the posts.  I had a look at the mosaic layout on WW1 Remembrance and was surprised to see my grandfather - Walter Nixon - and his brother Jack, staring out at me side by side.  Although I've had those photos for a while, I'd never actually bothered to view them next to each other.

Walter, on the left, served with the Royal Garrison Artillery and survived although he was wounded and gassed.  Jack was not so lucky and was killed in action on the 3rd October 1918. He has no known grave and is commemorated on the Vis-en-Artois memorial in France.  I am assuming his body must have been discovered as I have both of his identity tags which were presumably taken from his corpse.  That's why he has no known grave.  The correct procedure should have been to remove one of the tags and leave the olther on the body so that it could be identified.  As soon as both of those tags were removed he was destined to be buried in a grave identified only as "known unto God".
No comments: 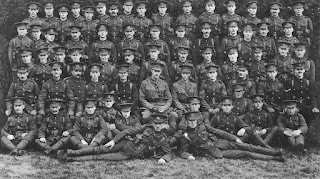 Great to see that findmypast.co.uk has now added the platoon, officer and band photos for the Manchester City Battalions.

The photo on this post shows men of Platoon IX, C Company, 22nd (Service) Battalion, Manchester Regiment.  Read the story of one of the Manchester Pals - Harry Toplis Bardsley - on my World War 1 Veterans' blog.
No comments: 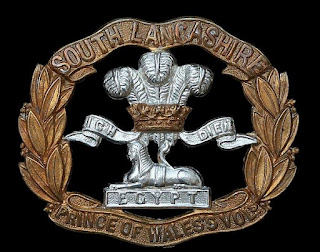 Here's a nice site which I don't think I've mentioned before: The South Lancashire Regiment in the Great War 1914-1919.

Although the site is still a work in progress - as any site of this nature will be - there is some good information appearing and it will become an increasingly useful resource.