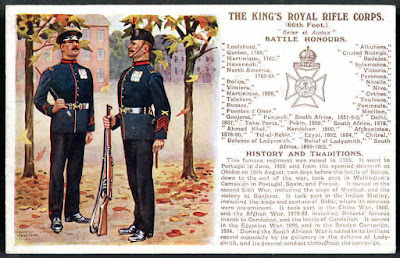 It's always a bonus when a postcard includes details of the sender. Writing to Mrs H Limpkin of Heath House, Linton, near Burton-on-Trent, 11895 Rfn Joseph Miller of the King's Royal Rifle Corps wrote, "Just a line to let you no [sic] I arrived safe at Winchester. I don't no [sic] how long I shall be stationed here for my arm is not better yeat and I expect I shall go under opertaion with it. I think that is all this time..." He gave his address as 3 Coy, KRR, The Huts, Winchester.

Jospeh Miller, according to surviving papers, attested on the 27th August 1914 and served overseas from the 29th November 1914 with the 1st and latterly the 16th Battalion, King's Royal Rifle Corps. He appeared in a list of 1st Battalion wounded published on the 9th June 1915 and again on the 13th April 1917 when he was recorded as suffering from shell shock. He was discharged on the 5th February 1919 aged 22.

Unpicking the information above, my guess would be that Joseph sent the postcard aftre he had been wounded (in the arm) whilst serving with the 1st Battalion. I think he recovered from this wound, was posted to the 16th Battalion and served in France and Belgium where he was subsequently invalided with shell shock, later being invalided out of the army as a result of this.

Love is in the Air (and on Land and Sea) 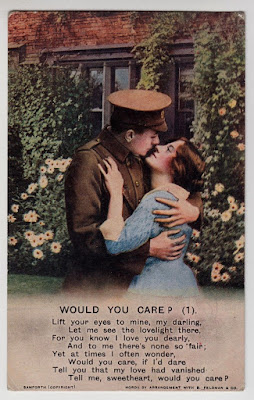 There are over 27 million military records on Findmypast, and with that many names, it is perhaps hardly surprising that there are some men and women whose names strike a particular chord today, 14th February.

There are 9,023 military records where VALENTINE is the first name, and 132 records for VALENTINE DAY. 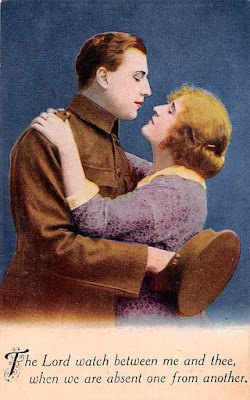 Finally, there are nearly 24,000 results for the surname ROSE, 187 BOUQUETs but not a single FERRERO ROCHER. Strange, that. Happy Valentine's Day. 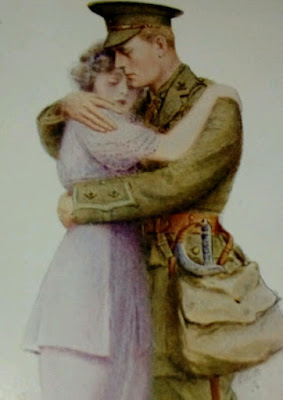 Victoria Crosses on the Western Front 1917 to Third Ypres 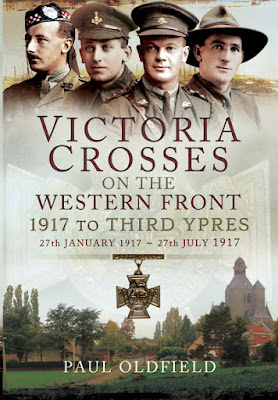 Paul Oldfield's latest tome weighs in at a hefty 556 pages and covers the period 27th January to 27th July 1917. That so many pages should be needed to cover such a short period is testimony not only to the courage exhibited, but also to the bitter fighting.

Once again, this volume can be read in two parts: the actions, which take care of the first 208 pages; and the biographies of the VC winners which take up the rest of the book.

The beauty of the books in this series is that they are well-researched and contain many useful maps and photographs. I wouldn't want to lu8gg this book across a battlefield because it weighs a ton. However, I could quite easily see myself investing in the Kindle edition and referring to the detailed trench maps and modern day panoramas.

These are not books that will, for the most part, be thoroughly pored over, cover to cover, but as reference they are extremely useful and so much more interesting to read than the often dry and dusty official histories. In the meantime though, I need to find another couple of inches of shelf space to accommodate this latest volume.

Birmingham in the Great War 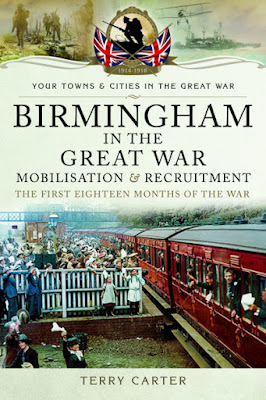 There are two words which should instantly recommend this title to anyone with even a passing interest in Birmingham during the First World War, and those words are "Terry" and "Carter". Terry's 1997 work on the Birmingham Pals remains a staple ingredient for anyone with an interest in Kitchener volunteers, pals battalions or Birmingham and this new publication in Pen & Sword's "Your towns and cities..."series is the ideal complement as it looks at Birmingham in the first 18 months of the war at a time when the pals battalions were recruiting and training.  There are useful chapters on the 1st Southern General Hospital, Belgian refugees in Birmingham, HMS Lusitania, HMS Birmingham, the expansion of the Territorials and, of course, the pals battalions.  One of the better books in this series, I would suggest, and well worth the £14.99 investment. Anything less should be considered a bargain.
No comments: 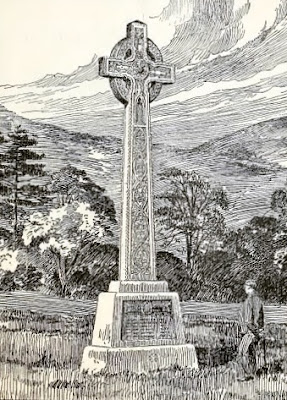 Kilmalcolm is a village and civil parish in the historic county of Renfrewshire. After the First World War, a book detailing the sacrifices of its parishioners was compiled by the War memorial Committee and published in a slender volume. The committee noted,

"It should be explained that [this book] does not profess to cover the whole parish. It was found impossible to obtain a complete list of the Clune Brae district, in the neighbourhood of Port Glasgow, and, accordingly, it was thought better to omit it altogether. Moreover it includes the names of some formerly resident in the parish, who feel that they still belong to it, and desire on this occasion to claim their citizenship."

There are 438 names in the roll, including 77 who made the ultimate sacrifice. The list of those men, as published in the Roll of Service for Kilmalcolm parish, are below. Further information on many of these men can be found on Inverclyde's Great War.