I came across the article above, published in The Times newspaper on the 23rd December 1914, and thought I would try and find out a little more about this man.

A quick Google search reveals that there is a huge amount of information on this man on the Manningtree Museum website, including the photograph below which, was originally published in De Ruvigny's Roll of Honour: 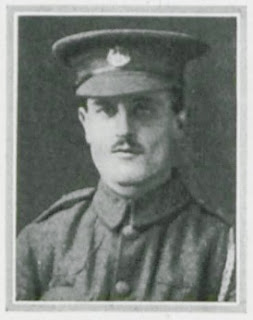 In actual fact, his regimental number, 3/3105 belongs to the 3rd (Special Reserve) Battalion and it was this unit that John joined - according to my database, on the 16th or 17th September 1914. His medal index card shows that he arrived in France on the 22nd September 1914; a remarkably quick transition from home to the Western Front, and all the more remarkable given that men joining the Special Reserve were supposed to undergo six months' training before they were sent as drafts to the regular battalions. Perhaps, given John's previous military experience with the Volunteer Force and Territorial Force, and given his proficiency with a rifle, it was felt that the rules could be waived.

John Tippins was killed in action on the 26th November 1914 and is buried in Calvaire (Essex) Military Cemetery, 16kms from Ypres. The Soldiers' Effects' Register notes that his father, Luke Tippins, was sent the sum of £5, three shillings and five pence after John's death and, later, a war gratuity of £6. There is an impressive brass plaque to him in Mistley church, Essex which pays tribute to his skill as a rifleman, and his former membership of the church choir.

I research soldiers!
Contact me if you need help.