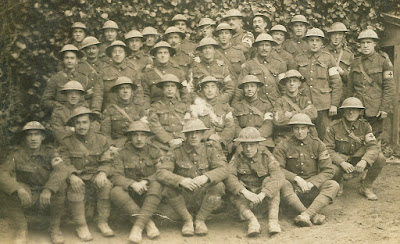 Earlier this year I bought a medal group to William Henry Newsam who served with the 29th Field Ambulance, RAMC, during the First World War. This is his story.

William Henry Newsam was born in Sheffield on the 14th September 1891. He was the son of William and Mary Newsam and they baptised him at St Stephen’s church, Sheffield, sixteen days later.

By 1901 the family was living at 5 Ada Street, Nether Hallam, Sheffield. The census return for that year (above) shows that William senior was working in the print industry as a "stereotyper". William Henry was then aged nine and he had a younger brother, Rowland, aged six.

Ten years on, the 1911 census shows the family now living at 9 Bosville Road, Sheffield. William senior is still shown working as stereotyper whilst William Henry is recorded as a bookbinder and Rowland as a machine printer. Another son is also recorded: Bernard Hugh Newsam, aged nine. 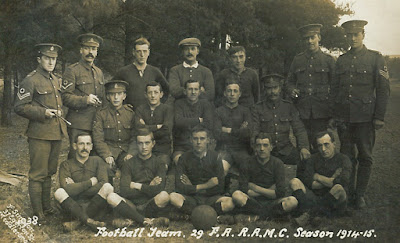 Although no service record survives for either man, there is nothing to suggest that William served with any unit other than C Section, 29th Field Ambulance. There is a photo of William in the 29th FA football team for the 1914-15 season along with other group photos all taken – judging by the photographer’s details on the front of these photos – when the unit was stationed at Middlesbrough. 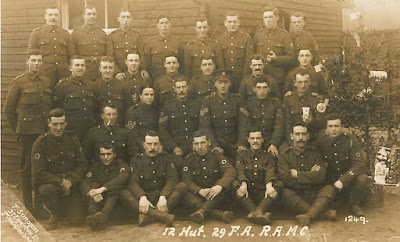 William and Rowland both arrived overseas with the 29th Field Ambulance on the 12th May 1915 and presumably served with the unit, part of the 9th (Scottish) Division, right through the Battle of Loos in September 1915, the Somme battles in 1916 and then Arras in 1917. 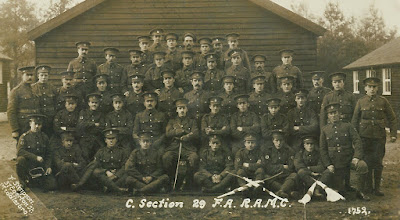 On the 9th and 10th September 1916 William took part in "The Bells", a "drama in three acts" performed at the Theatre-des-Arts at Rouen, the proceeds being handed over to the officer commanding No 2 convalescent depot. 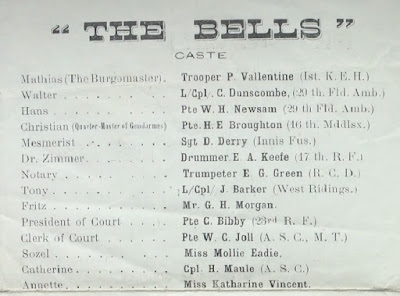 At some point too, William was also at Bethune. The card below is undated: 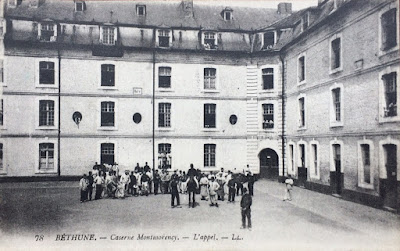 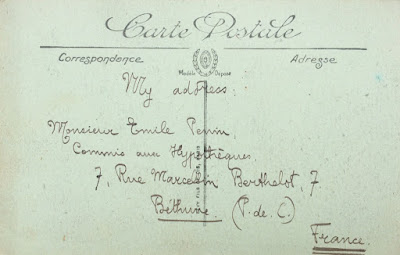 The Caserne de Montmerency was certainly used as billets - the poet and author Robert Graves was there in 1915 - and it is possible that William was stationed there.

It was at Monchy Le Preux on 3rd May 1917 that William was severely wounded. According to a handwritten note from his son - also Rowland which accompanied the medals I bought, William lay in water on the battlefield for 13 hours before being picked up. He was evacuated to England on Empire Day (24th May) 1917 and had a leg amputated. He spent time at the War Hospital in Thorpe, Norfolk, the Red House at Cromer and the Pavilion Military Hospital in Brighton. He was discharged from the army on 1st May 1918 as a result of wounds.

Read an earlier blog which dates to William's stay at Brighton.

Life after the army

William had married Emily C Rudd (born 21st March 1893) in late 1917 or early 1918, their marriage registered in the first quarter of 1918 in Eccleshall Bierlow, Yorkshire. Their son, Rowland Barratt Newsam, was born on the 30th October 1918.

William and Emily appear on the 1939 Register at 5 Wharncliffe Road, Sheffield (above). William is noted as a book binding manager and there is also a 48-year-old William H Rudd recorded at the house, presumably a brother of Emily’s. The closed record for this household is presumably Rowland, who would have been approaching his twenty first birthday when the register was taken.

Despite his appalling injury, William lived to enjoy a long life, dying in late 1980 or early 1981 at the age of eighty-nine. 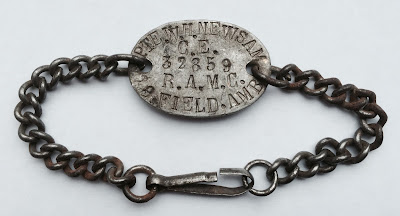 The medal dealers told me they'd bought William Newsam's collection directly from the family. It's a shame though that they didn't ask the vendor to identify William in the photos that accompanied his medals. Maybe they were told at the time but if that was the case, they certainly didn't pass the information on to me.  The only positive identification was of William in a bath chair in England after his amputation. This is a small photo, and one that has also deteriorated with age. 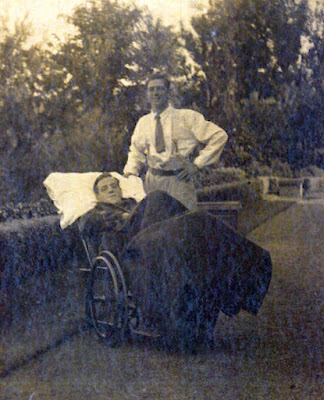 It was taken at a VAD Auxiliary Hospital, The Red House, in Cromer, Norfolk in August 1917. On the reverse of the photo William has written, "After 4th operation with my friend and assistant, Sergeant Butcher, KOSB".

Zooming in on this image, I looked for the same man in the other photos I acquired and am pretty sure that I have identified him. What do you think? 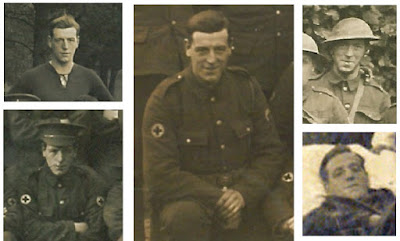 Also included in the lot were various other bits and pieces including the items below: 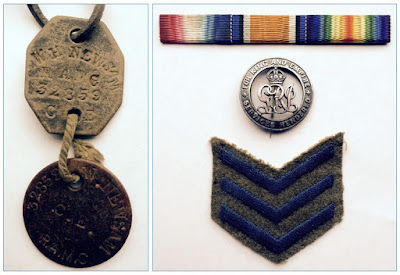 The medals themselves are unremarkable: a 1914-15 Star, a British War Medal and an erased Victory Medal which may not even have been part of the original lot and could well have been sneaked in by the dealer to complete the trio. To me, that small detail is not important. What is important is that the entire collection has been passed on for safe keeping and will, in time, be passed on to my children. In the meantime, if anyone can tell me anything more about William Newsam, I'd be very interested to hear from you.

Do drop me a line if you need help with your own family history research. I offer a fast and cost-effective military research service. Have a look at my military research page and contact me if you think I might be able to help.﻿