Not had a chance to properly go over this yet, but Ancestry has jusst added a VC database to its military collection.  That's a good thing of course, although VCs are a well researched topic and there probably won't be anything new here for anybody.

Unfortunately the collection, such as it is, is only browsable by surname letter, and the quality of the images leaves much to be desired.  My recommendation: Google your VC hero first and scoop up all the free stuff that'a already on line.  You'll probably end up with as much, if not more, than there is on the Ancestry VC collection.
No comments: 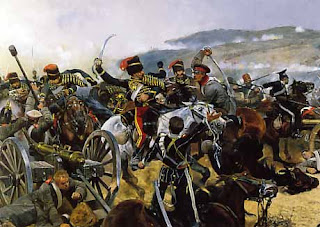 The following men, all awarded the Victoria Cross for service during the Crimean War, have surviving service records in WO 97, now accessible on line thanks to findmypast.co.uk. To view a record, follow this WO 97 Chelsea Pensioners link and enter the details below (Note, you'll need Pay-Per-View credits or a subscription to view the records).

In addition, the following Crimean War VC holders are referenced in the 1861 Worldwide Army Index:

If I had to pick out one record from those listed above it would be Roderick McGregor of the Rifle Brigade.  His service record notes that he was recorded 12 times in the Defaulter's book and court-martialled seven times.  No Long Service and Good Conduct medal for him then, but he did get the VC.
No comments:

Email ThisBlogThis!Share to TwitterShare to FacebookShare to Pinterest
Labels: Crimean War, Find My Past, Victoria Cross


Two Royal Artillery releases in one day has got to be good news.

As well as releasing its data on WW2 honours and awards for the corps, Find My Past has also published a database of Military Medal awards to the Royal Artillery between 1916 and 1993.  There's also some useful general information contained on the site, for instance, the difference in the promotion ladders between WW1 and WW2:

A driver was a soldier trained in the management and use of horses. The six horses drawing the gun, or wagon, were driven by three drivers, all on the nearside horses, and much training was required before drivers would be rated as competent. The drivers, of course, also looked after the horses and the management, condition and state of health of these animals was regarded as one of the most important functions in the battery.

All branches of the artillery used horses, not just the RHA. By WWII, mechanisation had replaced the horse but the gun limbers, lorries and self-propelled guns all required drivers and the rank remained. The number of horses meant specialist roles of saddler, farrier, and shoeing smith were used and added to the name of the rank. Horse-drawn equipment needed wheelers and fitters and the officer needed clerks who could write in artillery code and signallers who could send it.
All MM awards to the RA are now searchable on findmypast.
2 comments: 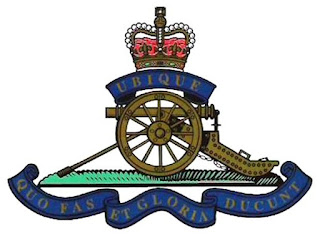 If your Royal Artillery ancestor was in receipt of an award for service during the Second World War, you'll probably find him or her on a brand new dataset just released on Find My Past. Royal Artillery Honours and Awards 1939-1946 contains details of awards to over 21,000 men and may include the following information:
These records have been assiduously compiled by the librarian at the Royal Artillery museum in Woolwich and are searchable on findmypast from today.
2 comments:

Email ThisBlogThis!Share to TwitterShare to FacebookShare to Pinterest
Labels: Army Ancestry, Find My Past, Royal Artillery 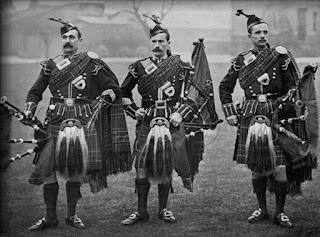 I picked up a copy of Anthony Edgeworth's The Guards yesterday and, looking at the photos, was reminded of an easy way to identify a particular regiment of Foot Guards. Simply look at the arrangement of the buttons on their tunics.

In terms of regimental precedence, the Grenadier Guards come first, followed by the Coldstream Guards, the Scots Guards,  the Irish Guards and finally, the Welsh Guards. 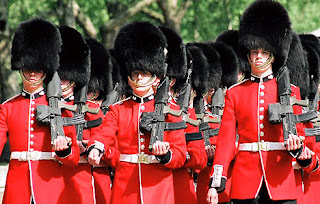 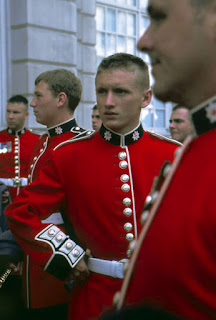 3. The Scots Guards - 3rd - buttons arranged in groups of three: 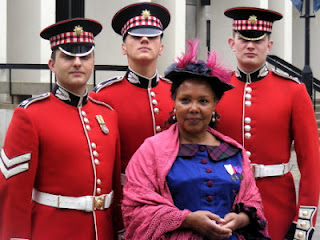 4. The Irish Guards - 4th - buttons arranged in groups of four: 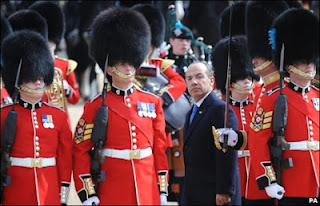 5. The Welsh Guards - 5th - buttons arranged in groups of five: 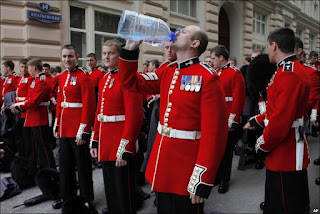 Easy when you know how.

The black and white photograph is courtesy of art.co.uk and then, in order of regimental precedence, The Daily Mail, Artangel, London SE1 and BBC News.
No comments: