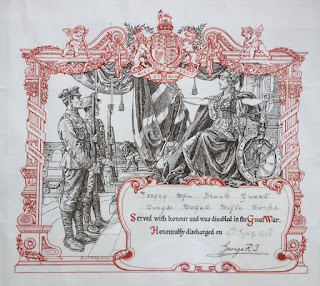 I have four variations of this certificate hanging on walls at home, and am looking for more. Designed by Bernard Partridge (later, Sir Bernard Partridge) this certificate was awarded to soldiers, sailors and later, airmen, who were disabled in the Great War. The example above, which is certainly the most common version seen, was awarded to British Army NCOs and men. In this particular case, the recipient was R/33979 Rfm Frank Guest of the King's Royal Rifle Corps who had previously served with the Gloucestershire Regiment (15855). Frank had enlisted on the 8th September 1914, arrived overseas on the 9th August 1915, and was discharged on the 9th May 1918. 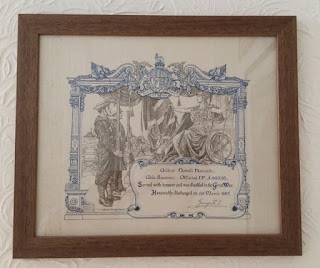 This was the version issued to Royal Navy ratings, in this case to J46338 Arthur Newell Hercock, born in 1896, who was "slightly wounded", according to his service record, in Mesopotamia. He died in 1974. 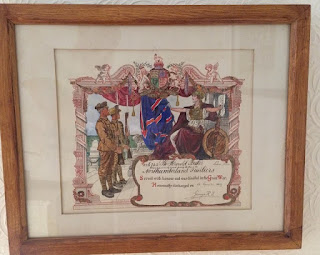 Harold Butler presumably coloured this certificate himself. He was a career soldier who originally joined the Northumberland Fusiliers (3722) in January 1914.and arrived in France on the 6th March 1915. His name appeared in a Times casualty list on the 6th August 1915 and after recuperating he was transferred to the Labour Corps (256342). He was discharged from 499 Company on the 14th November 1917 aged just 21. 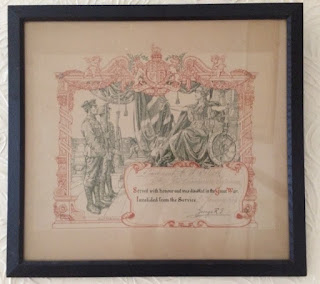 This last certificate, poorly rendered in this image, is for an officer, Lieutenant Charles Wilfred Elliott of the 5th Leicestershire Regiment. Officers' certificates were different from those of other ranks and had the words "Invalided from the Service..." rather than "Honourably discharged on..."

I research soldiers!
Contact me if you need help.
2 comments: 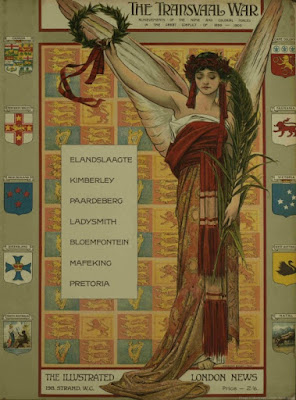 Did your British Army Ancestor serve in the Boer War? If he did, it's possible that he was mentioned in a local, or even national, newspaper.

Some while back I created a list of British and Irish newspapers which had been published online by the British Newspaper Archive and Findmypast and which covered the years 1914-1918. Each week, as more and more pages are published, I add to this list.

I have now created a similar list for newspapers which cover the Anglo-Boer War 1899-1902. There are over three hundred titles on this list and as with the 1914-1918 newspapers, I shall be adding to this whenever new material is published.

The British Newspaper Archive continues to impress and at the time of writing has published close to 19.3m pages across 756 titles. New content is being added at the rate of around 100,000 pages per week. It is, quite simply, a tremendous resource.

The links above will take you to my newspaper lists. Click on the link, if optimised, or simply go to the British Newspaper Archive or Findmypast and browse through the pages yourself. Here are those links to my pages again (which you'll also see in the menu above):

The superb illustration on this post is taken from the Illustrated London News. 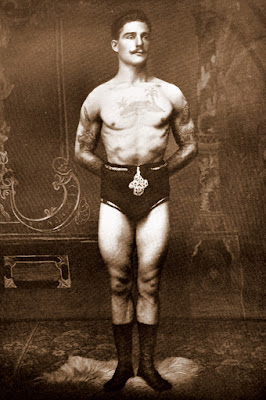 Here's a great photograph of a boxing and wrestling champion who served with the Rifle Brigade between February 1899 and November 1911. The write-up that accompanies this photograph in the Rifle Brigade Chronicle for 1908 notes that Samuel was born on the 13th March 1881 and served with the 4th Battalion Mounted Infantry during the Boer War. He was later posted to the 2nd Battalion in India and won several boxing and wrestling tournaments. The final paragraph of the shirt editorial reads:

"He frequently displays feats of strength, both in the barrack room and on the stage of entertainments, one of which is to make a bridge of himself, and in this position supporting seven men (equivalent to 1,087 lbs). He is entirely self trained and is popularly known as "Sandow Smith".

As well as notching up various wins in the ring, Samuel also amassed quite a good collection of tattoos. His original attestation papers survive in WO 97 and the distinctive marks' section on page two simply mentions "scar on left eye-brow" and a "patch of hard skin, back of left hand". 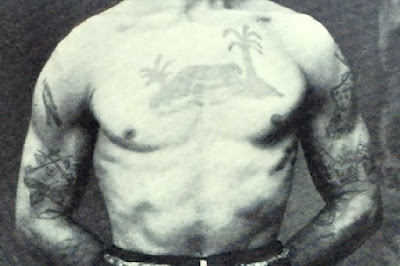 We can be certain therefore, that all of the tattoos on display here were acquired after he joined the army. The tiger and palm trees on his chest was presumably inked some time after his arrival in India in February 1906.  There is what appears to be rifle on his upper right arm, above the crossed swords motif commonly rendered as a badge for army gymnastics instructors. On his left arm there are two flags, possibly Rifle Brigade standards, and other motifs which are unclear. Who knows what was rendered on his back.

Samuel Smith remained in India until 1911 but returned home in November and was discharged "free after 12 years' service" this, despite having re-engaged at Fort William, Calcutta in February 1911 to complete 21 years.

If he served in the First World War, I have yet to find evidence of this. He certainly worked as a policeman, however, and on the 1939 Register is listed as a retired police constable, married to Rosie L Smith (born 20th July 1894). There are also four probable children noted, as well as three closed records:

When the 1939 Register was taken, Samuel and his family were living at Broad Street, Depwade Rural District, Norfolk. I have not yet identified when and where he died.