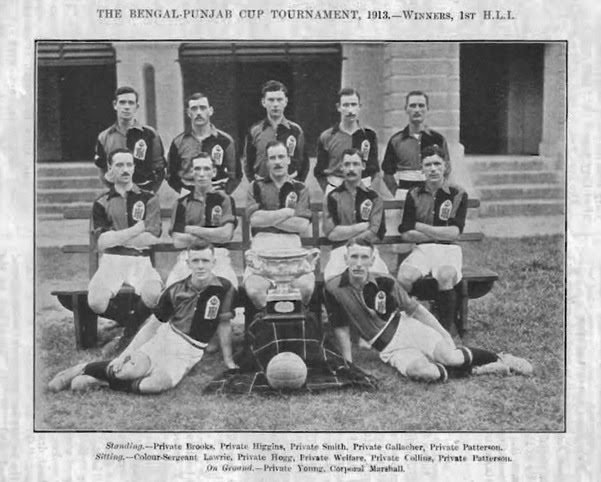 It's been a busy week so far with research projects.

The Gallipoli commemorations have obviously triggered some requests and it gave me enormous satisfaction to deliver reports to two clients on the 100th anniversary - to the day - of those ancestors hitting the beaches on 25th April 1915.

1. The mystery of a Boer War militia enlistment and whether this man later served in India and with the RGA during the First World War
2. Unpicking the First World War service of a Westmorland and Cumberland Yeoman who later served with the Labour Corps
3. A private with the RAMC who later served with the Welsh Regiment
4. A Royal Munster Fusiliers regular who served in India before the First World War and served with the RMF and Royal Engineers during the Great War
5. A KOYLI recruit who went on to serve as a regular in the British Army and earned a General Service Medal with Iraq clasp to go alongside his 1914/15 Star trio
6. An HLI regular who served in India and who is mentioned multiple times in the HLI Chronicle. I even found a photo of him in the regimental football team (above) in October 1913
7. A Middlesex Regiment regular with service in India, Gallipoli and France and Flanders
8. A Yorkshire Regiment war-time enlistment who later served with the 2nd West Yorkshire Regiment
9. Identifying when a 4th Dragoon Guard, born in the 1840s, must have enlisted and where he subsequently served
10. Researching the military career of a regular in the Dorsetshire Regiment who was awarded the India General Service Medal with clasps for the Punjab and Tirah.

Drop me a line if you think I could help with your own research project. 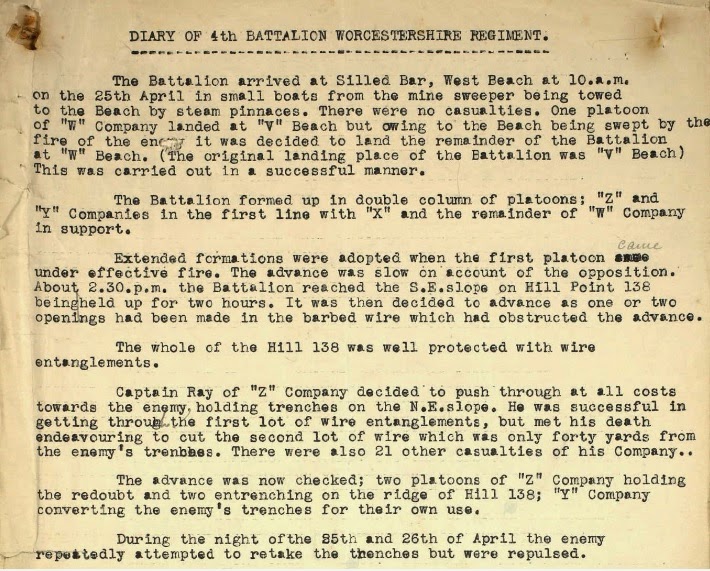 Just in time for the Gallipoli anniversary, Ancestry has published a raft of war diaries from the First World War. These include diaries that could previously be accessed from The Naval & Military Archive or from The National Archives and also, for the first time, newly digitised pages from units that served at Gallipoli.

This is going to be a tremendous asset and one I shall be referring to a lot. The extract above, the first entry in the war diary for the 4th Battalion, Worcestershire Regiment, describes its landing on West Beach on 25th April 1915.
No comments:

Words of comfort to an amputee 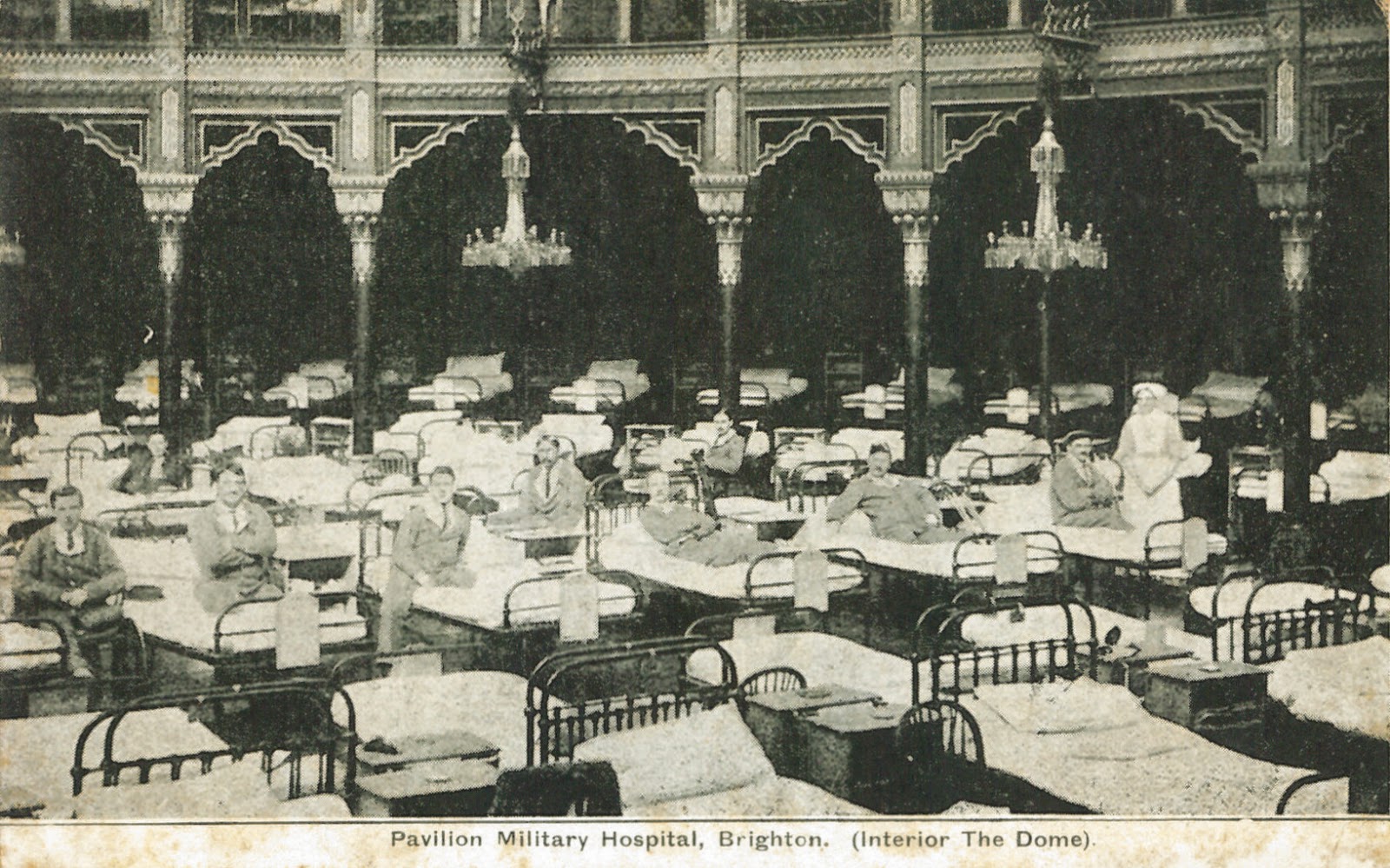 The card above shows wounded soldiers, all of them amputees, recovering at the Pavilion Hospital, Brighton.  It was sent to 32859 Pte William Henry Newsam of the 29th Field Ambulance, Royal Army Medical Corps, himself a recent amputee, in November 1917 while he was recovering at the Norfolk War Hospital in Thorpe.

The message on the reverse reads:

You will occupy one of these in due course but I may tell you they glory in operations. You are sure to lose another inch.

The signatory is unclear, possibly A J Butty, or Buttle/s (see below). I expect his words really cheered William Newsam up.

I acquired this card recently, along with W H Newsam's campaign medals, silver war badge and a lot of other very interesting material, and you can read more about him HERE.﻿

"If our researchers can't help you, no-one can..."

So runs the puff from a dismal Forces War site; and this too from a company that will charge you £100 for an individual's service history, give or take a fiver, and take up to 45 days to deliver that research.

I helped out someone yesterday who had parted with an obscene amount of money in return for three downloads from Ancestry's site. I was able to tell her when her ancestor had joined his regiment (which was not the same as the Derby Scheme enlistment date noted on his medal index card), the likely date that the man arrived in France and when he transferred to another regiment.  I also added contextual information and took time to explain the logic behind my conclusions. All of this was undertaken in 90 minutes for a fraction of that £100 robbery.

So, caveat emptor, and for goodness sake don't believe all that trumpet-blowing from an organisation which may be a legend in its own lunchtime, but is treated with scepticism by most of those who really do know a thing or two about military research.

If you have hit a brick wall in your own military research, do please drop me a line for an honest, no nonsense quote with real value reports rather than just over-priced images poached from rival websites.
No comments:

Who Do You Think You Are - NEC, Birmingham

I'll be on the Findmypast stand at the WDYTYA show at the NEC in Birmingham from Thursday 16th April through to Saturday 18th April. As well as answering the usual enquiries, general and military, I'm giving a couple of talks on researching your First World War ancestor, and finding your Waterloo ancestor.

If you're a reader of my blogs and you're going to be at the NEC, do pop over and say hello. If you can't make it to the NEC, all is not lost as both talks are being recorded for future webinars.

The image on this post, courtesy WDYTYA, does NOT feature the author of this blog.
No comments: