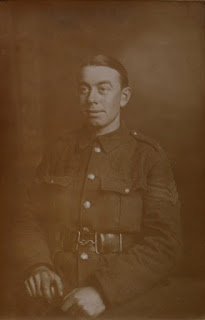 I have been re-reading Edmund Blunden's Undertones of War and was pleasantly surprised to find that pages from Edmund Blunden's minute book are available online at the First World War Digital Poetry Archive. These include photos of his much loved sergeant Frank Worley (above) as well as fellow officers and other personalities mentioned in his memoir.  This was a real find for me and I hope it may be for others too.

Frank Worley's service record does not survive but we know that he joined the 11th Royal Sussex on the 11th September 1914 (probably at Worthing) and that he was given the number SD/555.  His medal index card incorrectly records his name as WARLEY. Frank Worley was awarded the Distinguished Conduct Medal, his citation reading: 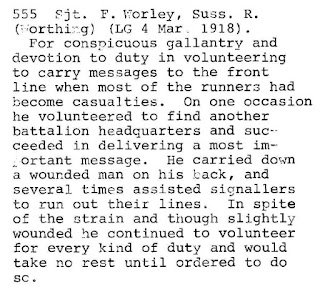 He was discharged due to wounds in December 1918, married in 1922 and died at Worthing in 1954 at the age of 63.  The register entry for his death records his name as Francis J (for Joseph) Worley.
2 comments: