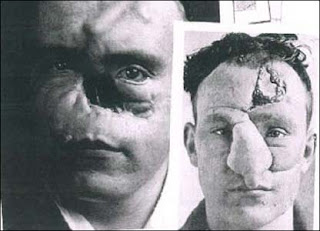 findmypast has published an expanded index of facially injured servicemen from WW1.  Due to the graphic nature of the majority of the images, just the indexes have been published, although parent company brightsolid paid to have the complete archive scanned and digitised and has provided digital copies to the Royal College of Surgeons which now holds the material.

The remarkable archive charts the work of Dr Harold Gillies and his pioneering teams who painstakingly reconstructed the faces of injured servicemen with remarkable results.  The photos on this page show the injury sustained by Lieutenant William Spreckley who - according to the index on findmypast - sustained a gunshot wound to his nose on the 14th January 1917.  In actual fact, his nose was completely blown off, as can be seen.  All the more remarkable then, that he should have achieved the appearance he had in later life  - see below: 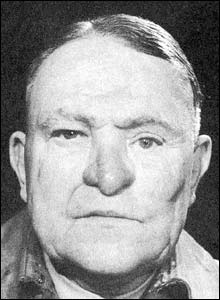 William Spreckley, born in Derbyshire, died in 1974 at the age of 80.  His service record survives at The National Archives in London.

Harold Gillies's seminal work, Plastic Surgery of the Face, can be downloaded free of charge from The Internet Archive.  Click on the link.﻿
No comments: