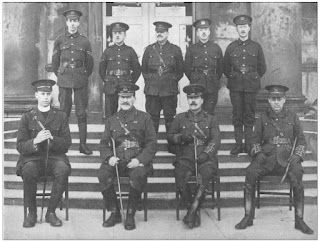 Find My Past has just added the Manchester City Battalions ﻿to its fast-growing military database.  Originally published in 1916, the Manchester Roll of Honour comprises a roll call of the men who served with the Manchester Pals battalions - the 16th to 23rd Battalions - giving details of platoons and companies served in.  Group photos are also included although these do not identify individuals by name.
The second part of the Manchester Roll of Honour is a listing of over 63,000 men and their employers. The detail provided in each of the rolls varies considerably. A small number of men are identified by last name only and many more only by last name and initials. There are also entries, however, in which the ranks, service numbers and regiments of each man are identified. A number of men are identified as killed or missing in action and a small number are recorded as having been rejected as unfit for service.
No comments:

Email ThisBlogThis!Share to TwitterShare to FacebookShare to Pinterest
Labels: Find My Past, findmypast.co.uk, Manchester

54 Years with the 1st Devon Militia

My thanks to one of my correspondents, Black Sapper, who has provided extracts from the above publication which was written by William Shepherd in 1907 and subsequently transcribed by Helen Barlow (date unknown).  Helen Barlow's full transcription can be viewed online here as a PDF file on the Open University website.

18.12.1854 – Regiment was Embodied for Permanent Duty on account of the Crimean War; At that time the Regiment had 10 Companies (Grenadier Coy, 8 others & a Light Coy)

05.06.1856 Regiment left Limerick for Cork, stationed at the Barracks on the Hill for 7/8 days before being ordered to England.

After an eventful journey by sea they arrived in Portland & Weymouth Barracks probably on 17.07.1856.

1858 – Training at Topsham Barracks. The Regimental strength was 778, there were 261 Absentees; battalion billeted at various Inns in Exeter.

1859 – Regimental strength was 512, there were 275 Absentees; battalion billeted at Topsham Barracks.

Regiment stayed throughout the 60’s at Topsham Barracks.


1868 – In consequence of the Fenian Scare full guard was mounted day &amp night over the Ward in St Thomas.

1869 – Regiment were in Plymouth for a Brigade Field Day at Devonport, returning the same day by train.

1870 – Billets were in St Thomas at Public, but with a strength of 802, part were in Cavalry Barracks the remainder in the billets.

1871 – Regimental strength was 803, Billeted in Inns & Private Lodgings; The Crown took Command of Militia Units from the County Authorities.

From this year it is noted that Topsham Barracks were denuded of regular troops for many years.

1888 – Regiment moved from St Thomas to the Higher Barracks & then the Camp Field behind Topsham Barracks; New colours were issued about this time.

1899 – Training was at Honiton in a camp on the Exeter Road.

11.05.1900 – Regiment was up for Permanent Duty on account of the South African War & went to Salisbury Plain, via Queen Street Station &amp Porton Station until arrival at Bulford Camp; They stayed here for 3 months before moving to another Camp at Parkhouse some 2 to 3 miles away; Camp Parkhouse was mostly Volunteers.

At this time the 3rd Devon Regiment was embarking for Plymouth & the 1/4th were billeted at Fort Regent, St Hellier.

1902 – there was no Regimental Training. 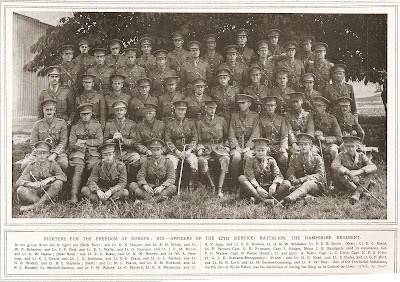 The Illustrated War News can be a great source for photos such as these, often showing not just the photos, but publishing a list of the subjects as well.

According to The Long, Long Trail website, the 12th (Service) Battalion of the Hampshire Regiment was formed at Winchester in October 1914 and attached to the 79th Brigade in the 26th Division. It moved to Codford but by November 1914 was in billets in Basingstoke. In March 1915 it move to Bath and then on to Sutton Veny in May. The photos published here were probably taken around this time.

The battalion landed in France in September 1915 but was sent to Salonika shortly afterwards, arriving on the 25th November 1915. 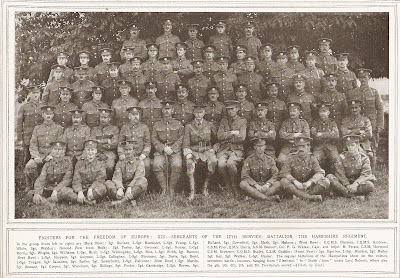 Sergeants of the 12th Hampshire Regiment
No comments:

Somewhat belatedly (because I've only just noticed) I see that the Commonwealth War Graves Commission has revamped its website, including the search functionality.

Not before time, visitors can now search by rank, service number, regiment, secondary regiment and honours and awards.  Furthermore, it is now possible to search solely on a term without having to key in other information. So for instance, one can see that there are 377 casualties who hold the Victoria Cross, 3658 holders of the Distinguished Conduct Medal (3346 of these holders dying during the First World War), and 2057 men with the rank of lieutenant colonel (which I must say, surprised me that there were quite so many).  Incredibly, there's also one casualty, Major General Charles Edward Dutton Budworth CB, CMG, MVO who was ten times Mentioned in Dispatches.  He is commemorated on the Kirkee War Memorial at Pune in India.

When results are returned it is possible, as it was before, to organise each column in ascending or descending order and now also possible to export data as a CSV file (although exports do not include the additional information field).  The ability to search by keyword, and thus pick up information in the Additional Information section would have been the icing on the cake, but I see that work is under way to include this. Even so, the new-look CWGC site is a vast improvement on the older site and can only assist family and military historians alike.
No comments: