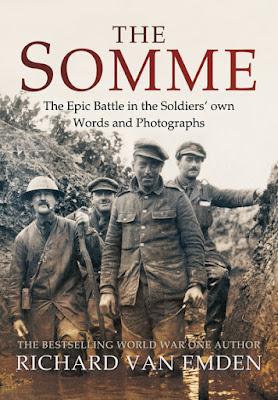 The Somme - The Epic Battle in the Soldiers' own Words and Photographs
Pen & Sword, £20

There are a number of reasons why this book should earn a place on military bookshelves. Although the Battle of the Somme took place nearly a century ago, and although it has been written about and debated ever since, in many respects this is a completely new take on that grim campaign. As Richard van Emden notes in his introduction, the scale of the tragedy on the first day alone - 60,000 casualties, including nearly 20,000 dead - has been repeated so many times that it has almost lost its power to shock. Instead, what we have here in this new appraisal, is a slow building up towards that dreadful day and the months that followed. The story begins not with the whys and wherefores of the campaign – these can be found easily enough in other books – but soldiers arriving on the Somme in July 1915 and Second Lieutenant George Webb of the 1st Dorsetshire Regiment writing of “a delightful little village some way east of Amiens.”

Richard Van Emden is a skilful and passionate author who has written many volumes on the First World War. Here though, he never lets that passion interfere with the voices of the men. This is, after all, “the epic battle in the soldiers’ own words…” and it is the men who tell the story, with Richard Van Emden coordinating in the background rather than intruding.

Many of the voices will be familiar to those of us who have studied the campaign over decades, and have built up our own libraries, but there are plenty of private papers which are published here for the first time and which provide fresh perspectives on a well-worn subject. I met and interviewed Sapper Norman Skelton, one of two people to whom this book is dedicated, back in the mid-eighties, and it is good to see him recalled in this volume, even though he was too young to have taken part in the 1916 campaign himself.

But this book is also far more than simply recollections. Personal photographs, many of these published for the first time, proliferate on these pages and show the unvarnished truth of life in the front line. These are not the official photographs, re-published many times over the last 100 years, but the amateur snapshots taken on hand-held Kodaks which have never been seen before.

The Somme is compelling, the soldiers’ words and photographs haunting. Get yourself a copy.

Brighton & Norwich in The Great War 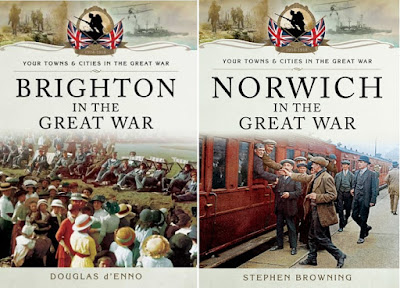 Brighton in the Great War

At 266 pages, this is one of the better value books in this series. Of particular interest to me are the sections dealing with the military and auxiliary hospitals in the town. The vast majority of the men who found themselves transferred out to Chailey's two auxiliary hospitals had originally been treated at the 2nd Eastern General Hospital in Dyke Road. That hospital is well-covered in this book, as are many others, including the Kitchener Hospital and the Brighton Pavilion, transformed as a hospital to treat Indian troops. The author must have spent many hours on this particular research project and has mad good use of contemporary reports published in local newspapers and elsewhere. This is an easy and compelling read.

Norwich in the Great War

This volume, slightly cheaper than the Brighton in The Great War, also has a 50 per cent lower page count. That's a shame because Norwich was an important hub in this part of England and I would have thought that there would have been plenty more relevant information that could have usefully been published here. The Norfolk Regiment, for instance, is barely touched upon, and yet the city of Norwich provided two companies for the 4th Battalion (Territorial Force), and one battalion for the 6th (Cyclist) Battalion (TF). The Norfolk Yeomanry was also headquartered in the city, and Norwich provided one of the regiment's four squadrons. None of these men have a voice in this book. The author also asserts that the Norfolk Regiment's nickname, "Holy Boys", owes its origins to the city of Norwich having many churches. More colourful - and, I have to say, plausible - origins of the nickname which the author might have added are that it was gained when a) the men sold their bibles during the Peninsula Wars to buy drink or b) Spanish soldiers mistook the figure of Britannia on the men's badges for the Virgin Mary.

Local effort in the Great War

I have several of the books in Pen and Sword's Towns and Cities series but it is really pot luck as to whether the author has gone the extra mile to really get under the skin of the place during the Great War. Douglas D'Enno has done so for Brighton, Stephen Browning could have done more for Norwich. Having said that, both books - and books in the series in general - are full of evocative photos, many published in book format for the first time, and there are plenty of snippets of information which help to paint a picture of the time. Were I living in Brighton or Norwich with only a passing interest in local history I would still consider both books essential additions to my library. I just might feel I'd got better value if I lived in Brighton.