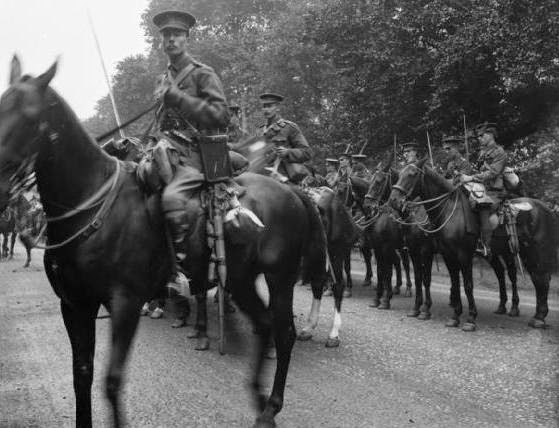 This from the ever entertaining late Marquess of Anglesey in volume 7 of his imperious, A history of the British Cavalry 1816-1919.

"The marching order for the trooper was still as it had been in earlier stages of the Boer War - heavy. His average total weight on horseback was about eighteen stone. He wore a stiff-peaked khaki cap, a khaki serge jacket, breeches, known as 'pantaloons', made of khaki cord with leather strapping at the knees, puttees, black ankle boots and spurs. Over his left shoulder he carried a bandolier of ammunition with thirty rounds and a felt-covered water bottle. Over his his right shoulder was slung a haversack 'which bulged with every sort of unauthorized contents and seldom contained knife, fork and spoon, which should have been there but which were usually jauntily tucked into the top fold of his puttee'. Each horse carried round its neck another bandolier with a further sixty rounds of ammunition. The .303 Short Magazine Lee Enfield rifle, the same as carried by the infantry, rested in its leather rifle-bucket on the off-side. By 1905 all cavalry regiments had been issued with it. It had a theoretical range of one and a half miles. The magazine held ten rounds. The German and French equivalents held only five. To the saddle were strapped a flat, round metal mess-tin and a feed-bag with seven pounds of oats. On the near-side were a leather sword-frog (a development of the sabretache) and pouch holding his sword, spare horseshoes, another seven-pound feed bag and a folding canvas bucket. On the saddle's front arch was a pair of leather wallets for small kit with a rolled mackintosh cape over them and on the rear arch a rolled greatcoat. Under the saddle were one blanket for the man and another for the horse.

"The mounted element of the BEF which crossed the Channel during the hot, almost windless days of mid-August 1914, consisted of 9,269 of all ranks, with some 9,815 horses; eighteen cavalry regiments in all. The Cavalry Division was made up of the 1st, 2nd, 3rd and 4th Cavalry Brigades, each with three regular regiments (including, in 4th Brigade, the Household Cavalry Composite Regiment). The 5th Cavalry Brigade was to act as an independent formation. Some idea of the division's size is given by the fact that on the march it covered eleven and a half miles."

The image on this post, courtesy of Wikipedia, shows a squadron from the 1st Life Guards in August 1914 preparing to leave for France.

Update
After posting this link on Twitter, I received some interesting responses from individuals whose opinions I respect, stating that whilst the marching order for troopers later in the war may have included the accoutrements stated above, this certainly wasn't typical of cavalry embarking for France in 1914. Contemporary photographs that I have seen of cavalry in 1914 (including the photograph on this post) certainly support this.
No comments: 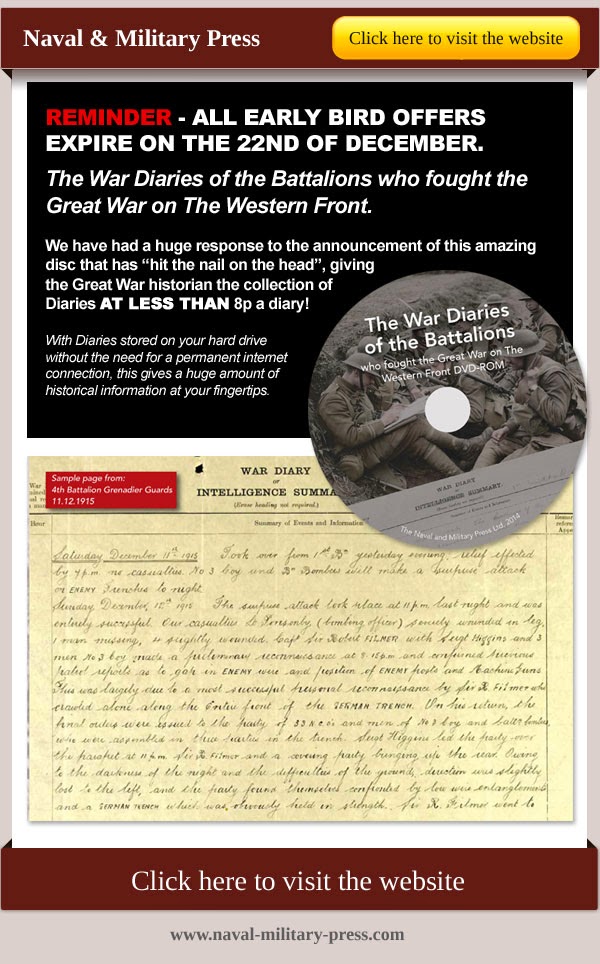 I've just been sent a reminder by Naval & Military Press that the early bird offer on their War Diaries CD ROM ends on the 22nd December.

Have you been good this year? Well if you have, treat yourself to this CD ROM and save yourself a hundred quid. Better still, get the missus or fella to stump up instead. After 22nd December this essential resource is going to cost £450. Buy it now for £350.

Remember too that Naval & Military Press offers EASY PAYMENT options. Spread the cost of this over four or twelve months and pay NO INTEREST.
2 comments:

Hot on the heels of Ancestry's vastly improved look, feel and functionality to its military records which I announced yesterday, comes a very useful enhancement to the search functionality of Findmypast's First World War service record search.

I refer specifically to the collection called "British Army Service Records 1914-1920" where the simple addition of a Keyword search box has just made life a whole lot easier for everybody.

To give a simple example, if you were interested in researching men of the 15th Battalion, London Regiment, finding them before today was a painful process. You could search on "London Regiment" but then you'd need to wade though all the results, ignoring all of those men who served in battalions other than the 15th.

Now though, you simply type in 15th Battalion in the keyword search box and you are presented with 6299 results. What's more, whilst in order to get the best results when searching for a regiment you need to be liberal with the use of wildcards - see my post on Findmypast's blog about this - you can forget about wildcards altogether on the keyword search.  Typing in 15th Battalion will return results for 1/15th, 2/15th, 3/15th etc.

This addition is going to be extremely useful for drilling down into service records. The sub units have been recorded in many cases but you simply couldn't get at them before today. Now you can.

I know what I'm going to be doing over the Christmas break.
No comments: 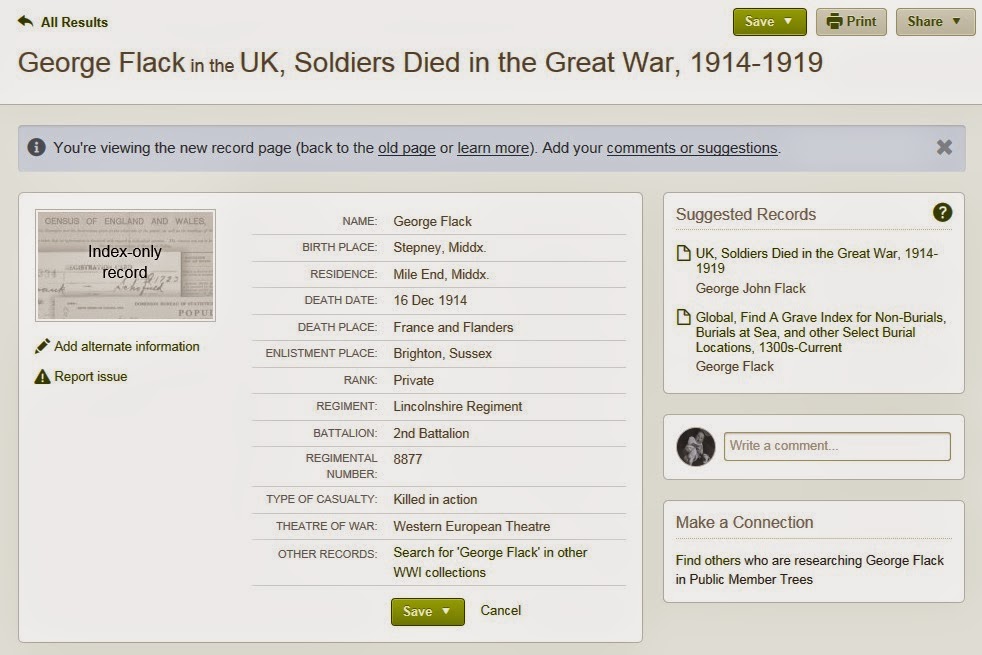 I've just noticed that Ancestry have been busy improving the layout of some record collections.

I've only looked at military records so far, but those that I have seen are laid out far more clearly than they were previously and, in the case of SDGW, it is clearly stated that what you are looking at is a transcription only (see screenshot above). There is also room to leave your own comments which I don't think was an option in the previous version.

I have just added a post about George Flack, seen in the example above, who was killed in action 100 years ago today. It must have been a rotten Christmas for his family. 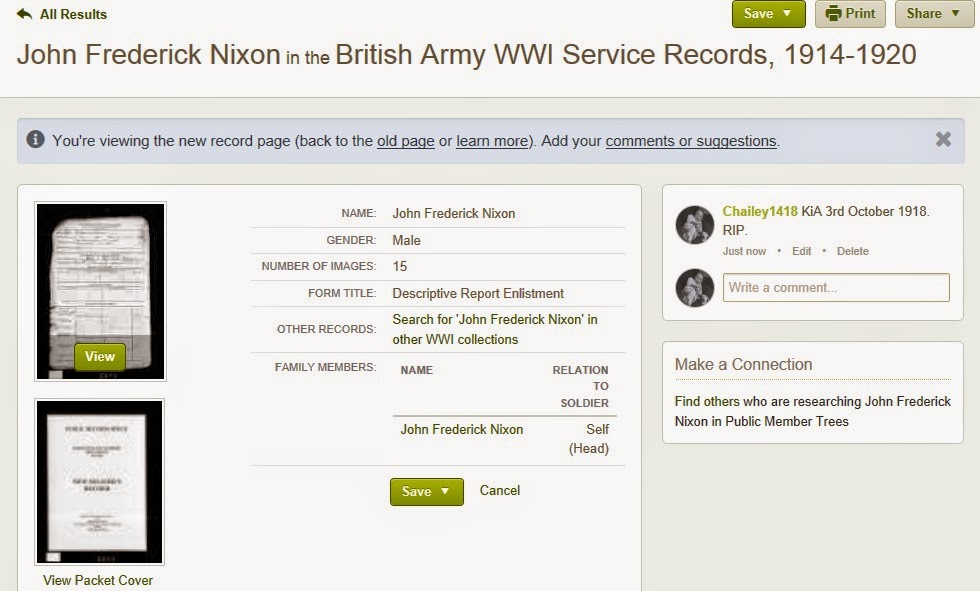 The screenshot above is the entry page into my great uncle's service record on WO 363. Here, you can quite clearly see that there are images in the collection and in this case I did leave a simple comment which is now visible in the top right hand corner. 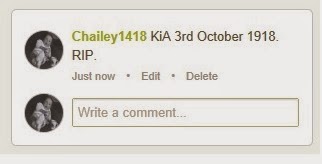 All of this is very neat functionality, and there is also the option to connect with people who may be researching the same man. In this particular case, we're back to Ancestry's usual "serve 'em up everything" approach and I see that there are supposedly 48,862 results, the first result being a man who was born in 1832.  So this can't possibly be my great uncle and one would have thought that more fine-tuning to serve up relevant results (or at least, more relevant results) shouldn't be so hard to achieve.  Perhaps it's in the pipeline.
Find your own military ancestors on Ancestry by clicking the link. 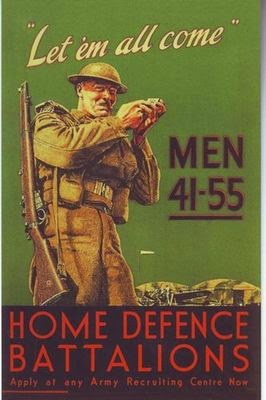 I'm often asked if I can research men who served in the Second World War. The answer is No.

Unfortunately, service records from World War Two are not yet in the public domain. If you are researching a WW2 man, you will need to contact the Ministry of Defence. The procedure is straightforward and is clearly outlined on this MoD website.

I'd love to be able to add The Second World War to my research topics but as I say, service records form this period are still with the MoD and so my advice for World War Two research is always to start there first. But if you need help with pre WW2 research, please visit my research page HERE.

To find your pre WW2 army ancestor, try searching on Ancestry, which has recently updated the way it presents its military records.
No comments:

Was your ancestor captured in 1914? 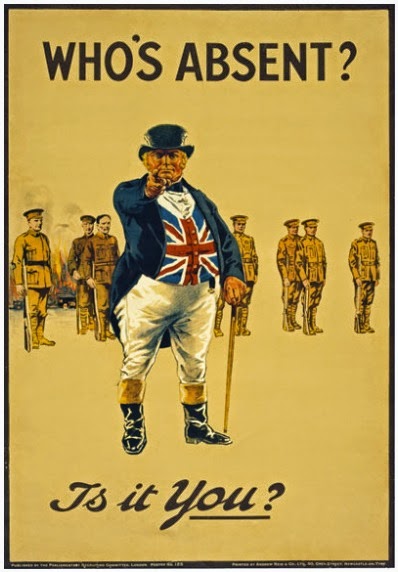 I've just added my latest roll of 1914 other rank prisoners of war on my army service numbers blog, this time for the Irish Guards. 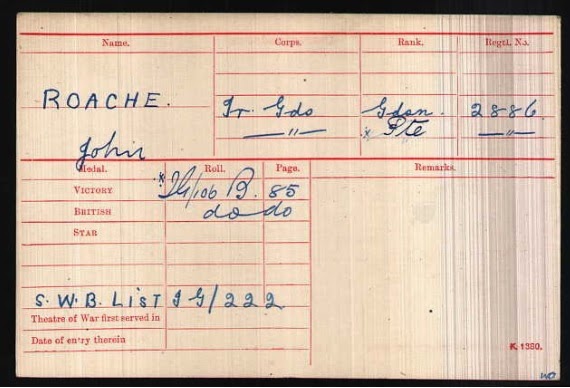 I have noticed that in most cases where it is indicated on a medal index card that a man was a prisoner of war, that capture took place in 1914.  This holds true for the majority of regiments although of course there are exceptions and it doesn't necessarily follow either that all 1914 PoWs have this information stated on their cards. John Roache, above, is a case in point, although note that this card does not include details of his 1914 Star either.
No comments: