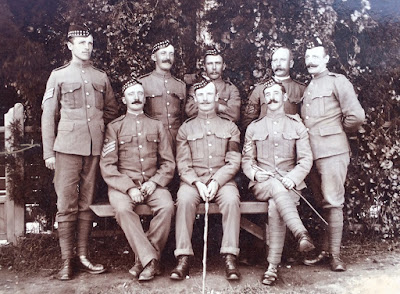 I bought this photo last week and now I'm trying to put names to the faces.

There are eight men: seven colour sergeants with the regimental sergeant major seated in the centre. The men all belong to the Royal Scots Fusiliers and they're all wearing khaki. Oddly, with so many years' service between them, there's not a single medal ribbon to be seen.

This leads me to surmise whether these men belonged to the 1st Battalion, Royal Scots Fusiliers. The 1st Battalion had last earned campaign medals for the Crimea in 1855. They had been stationed in the UK since 1882 but in 1896 they sailed for India, arriving in September. They would remain in India until 1910 when they embarked for South Africa.

In this photograph, the men wear the 1896 pattern frock; the Indian version with the scalloped collars. Could this photograph have been taken shortly after their arrival in Sialkot?  In 1897 the battalion would take part in the Tirah campaign and those men who participated would later be awarded medals.

The senior NCOs listed below all received the India Medal with clasps for Punjab Frontier 1897-98 and Tirah 1897-98 (and Colour-Sergeant Smith also received the clasp for Samana 1897).  Do any of these men appear in my photo above?

Judging by their regimental numbers, William Bailey would have joined the regiment in 1883, Lees and Smith in 1885, Walker in 1887, and Craig in 1888. None of these men went on to serve in South Africa during the Boer War and all would have been time-expired by 1914 (although William Bailey re-enlisted in 1915 aged 52!)

Of course, the men in the photo could also have belonged to the 1st Battalion, RSF which would go on to see service in South Africa between 1899 and 1902. Known senior NCOs of the 1st Battalion in 1901 are listed below:

If anyone can assist with the identity of these men - or even confirm the battalion, I'd be very pleased to hear from you. Leave a comment or drop me a line via the Research tab. 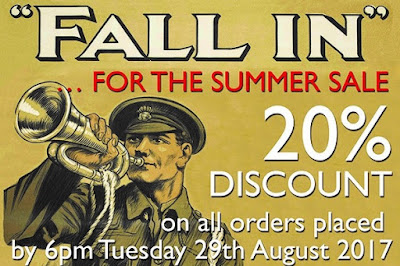 Huzzah! It's that time of year again; the Naval and Military Press summer sale! Grab a 20% discount on all orders placed by 6pm on Tuesday 29th August 2017. This includes discounts on already heavily discounted titles such as the Your Towns and Cities in the Great War series. In my opinion these are a mixed bag. There are some cracking, highly-readable accounts as well as some mundane and poorly written volumes. Mind you, at just £2 a throw during the summer sale period, even the mundane titles are worth a punt for the photos alone. 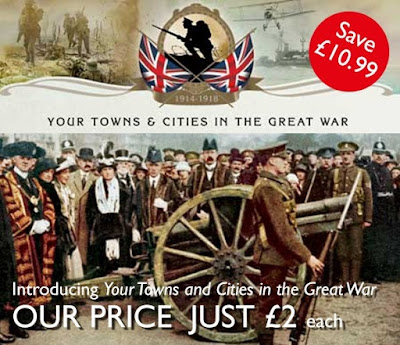 Personally, I'll be adding to my collection of the British Red Cross & Order of St John titles (which would be more useful still if they had been indexed and published online). Now there's a thought...