Training the soldier to ride 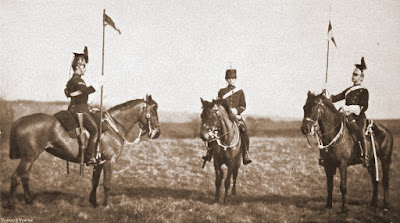 The article below was first published in the Navy & Army Illustrated on the 11th February 1899 under the heading, Military Equitation. To a non-rider like myself, it is quite technical in places, but it does give a good idea of what a recruit had to undergo. And remember too, that being able to ride a horse was not a prerequisite when it came to enlisting in mounted units other than the yeomanry. The photo above shows riders at the top of their game, from left to right: 5th Lancers, 10th Hussars and 12th Lancers.

"The following remarks on the education of mounted recruits are intended to supplement those recently made on the training of Army horses. People invariably applaud the collective good horsemanship of a smart cavalry regiment, as well as the skill and address of individual experts in the arena of a tournament; but there is in general no conception of the pains required to bring men and horses into perfect and harmonious working order. The patient and skilful training of the young horses would be entirely thrown away if the riders were not taught, with equal care, how best to perform their share of the work.

"In order to become an efficient soldier on horseback, the recruit must, first of all, be a soldier on foot. He must learn prompt obedience to the word of command. His body must be balanced, his shoulders thrown back, and his muscular powers developed; in short, he has to be “set up”. The proper poise of the rider gives the horse the best chance of escaping a sore back, broken knees, and undue fatigue; the correct position of the shoulders is essential to closeness of seat in the saddle, while the flexibility and muscular development, the foundation of which is acquired on foot, enable the man to accommodate himself to the horse’s movements, and to direct them in all circumstances.

When the recruit is placed on a horse, he should be exactly on the weight-carrying centre of the animal’s back. In that position there is at once a minimum of disturbing motion, and a maximum of facility in the application of the “aids” by means of which the rider compels the horse to move in any direction and at any pace. It is, therefore, of the greatest moment that the saddle should be so constructed as to keep the soldier’s weight on that part of the back, and likewise that the recruit should perfectly understand the use and proper fitting of his horse’s saddlery in all its parts.

"After he has gained some confidence at the walk, trot, and canter, with stirrups, he is taught to ride without stirrups. This is a very trying exercise, especially on a rough horse, but it is the surest road to a safe seat. It teaches the rider to adapt himself to all the paces of the horse, and makes balance a second nature. Balance is the true foundation of all good riding; the man who has it does not require the help of the bridle to keep him in his place, but is, on the contrary, erect and independent, master of himself and of the horse he bestrides. The muscular power of the rider comes, of course, to his assistance when pressure of the leg or a tight grip of the saddle is necessary; but even then it is on balance that he mainly depends for the due control of his horse and the effective employment of his weapon.

"The meaning of the “aids” is defined in the authorised manual to be “the motions and proper application of the bridle-hand and legs, to direct and determine the turnings and paces of the horse.” For instance, in answer to the question, “ What aids are required in turning right or left About?” the following is laid down, and must, like other instructions, be remembered and repeated by the recruit : “ A stronger feeling of the inward rein, and a stronger pressure of the inward leg, supported by the outward leg and rein, the horse turning on his centre, fore and hind feet describing a circle.” On cantering, the recruit is taught to have a stronger feeling of the inward rein and outward leg; that is to say, if ordered to canter round the school, or in a circle, to the right, he will apply the right rein and left leg more strongly, and vice versa. He is also shown that by this use of the aids he can prevent his horse from cantering “false” or “disunited,” the former of these terms meaning the leading with the left leg when cantering to the right, and vice versa, and the latter the leading with the off fore and near hind, and vice versa.

"In “ shoulder-in,” the recruit learns to lead with the outward rein, while the inward preserves the bend. His inward leg presses the horse to cross his legs, and his outward keeps him up to the hand. In the “passage,” on the other hand, the inward rein both bends and leads. These movements are essential to the quick and smart performance of mounted duty, and they ensure the obedience of the horse to the indications of the rider’s will, frequently enabling him to gain the advantage over an adversary who is not so well mounted and drilled. The skilful application of the rein and spur produces movements which would be impossible for untrained horses, and, what is more, the state of training into which cavalry horses are brought, fits them for moving in the ranks with flexibility and order. In military schools fancy exercises find no favour, and are not according to regulation; but our present exercises form the foundation of our cavalry efficiency. Only a small portion of the drill has been touched upon, the object being to convey to the uninitiated some slight idea of what is necessary to the production of an efficient military horseman."
No comments:

Clothing the British Army in 1899 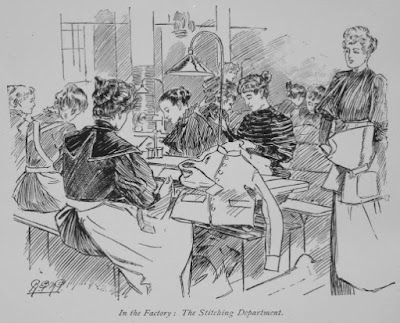 The following extracts, and illustration, were first published in the Navy & Army Illustrated on the 28th January 1899.

"Every material used in clothing our soldiers is of the very best quality. It has often been remarked that a deserter never has any difficulty in exchanging his boots, shirt, and other articles of clothing that are not actually distinctive parts of his uniform, the reason being that they are of so much better quality than those he gets in return. The greatest care is taken in the selection of material, and endless pains are bestowed upon the making of the garments. Vast quantities of foot and head gear are bought ready-made, £233,000 a year being paid for boots and leggings, £50,000 for head gear, and £27,000 for other articles bought ready-made. But by far the greater part of the “goodly garb” a British soldier wears “ starts into shape and being” from the shears in the Royal Army Clothing Department at Pimlico. From this unpretentious-looking block of buildings every yard of cloth used in the British Army is issued.

"The buildings cover more than seven acres of ground, and consist of four solid sections, three being given over to packing and storing materials and made-up garments, and the other being divided into the inspection department and the factory where the garments are made. Once a year tenders are issued for the supply of fresh materials, and contractors come to the Clothing Department to examine the patterns of stuffs required. The pattern-room is a large apartment, where a sample of every article of dress and toilet used by a British soldier is kept. All goods sent in by contractors are tested carefully, to see that they are in every detail according to the sample. For instance, the cloth sent in is stretched until it breaks, the breaking strain in pounds being registered on a dial. The dye is also subjected to a test, a sample of the cloth being boiled three or four times over, to see whether the colour is according to contract. After these ordeals the cloth is passed over two horizontal rollers, and examined by experts who look for holes and flaws. Having passed this test satisfactorily, the cloth is folded, and every quarter of a yard is stamped with the Government broad arrow, and with the number of the person through whose hands it passes, who is responsible for the bale.

"The quantity of cloth and serge issued in a year amounts to 3,600,000-yds. Think what this means. If the cloth were laid down in the roadway it would more than reach from London to Manchester. The quantity of cotton material used in a year comes to about 1,500,000-yds. Of silk and thread it is calculated that 40,000 miles are drawn through the cloth in a year, which is practically 130 miles a day. The material used in the Royal Army Clothing Department costs £485,000 a year, and the annual wages of the Department average about £64,000."