Disrespectful and addicted to drink 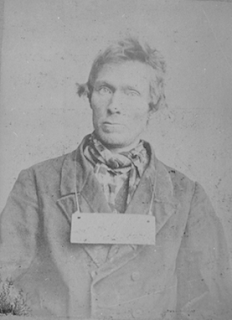 The man pictured above is Richard Jackson, born in Burslem around 1843 and admitted to Aylesbury Gaol on the 30th October 1873 to serve a sentence of 21 days for stealing beans.  Richard was 30 years old and gave his trade as a boot closer.  Five years prior service in the 104th Regiment of Foot is also noted.

I checked to see if Richard had a pension record in the WO 97 series published on findmypast.co.uk and he does.  He was discharged on the 14th October 1869 being found unfit for further service.  His conduct was recorded as "... bad, he is not in possession of any good conduct badges.  Has been guilty of disrespect to his superiors and has been addicted to drink."  Richard's name appeared six times in the regimental defaulters' book and he was imprisoned for seven days on two separate occasions.  Pthisis Pulmonalis (consumption, or TB) was the cause of Richard's discharge from the army and he certainly looks older than his 30 years in the photo.  Further notes on his 1869 discharge record, "Greatly emaciated and suffering from cough and the usual symptoms of phthisis. Disease has probably been aggravated by intemperance." A sad story and I have been unable to find him on the 1881 census.
No comments:

Email ThisBlogThis!Share to TwitterShare to FacebookShare to Pinterest
Labels: Aylesbury Gaol, Buckinghamshire Archives, Find My Past, findmypast.co.uk, WO 97

Company organisation in the VF and TF 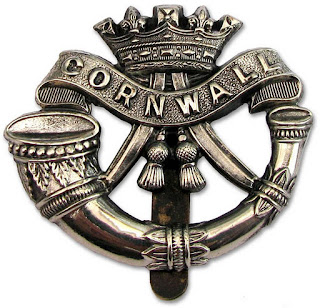 Referring to the entry on the 1871 census which recorded my great great grandfather as a sergeant instructor of Volunteers, I recently wrote, "This was possibly the 1st or 2nd Volunteer Battalion of the Duke of Cornwall's Light Infantry as he was by then living in St Austell."  Actually, I should have known better.

There is enough published material to hazard a pretty good guess as to likely Volunteer Force (VF) or Territorial Force (TF) service for relatives whose home locations are known.

Using my great great grandfather as an example, in 1871 what would become the 2nd Volunteer Battalion, Duke of Cornwall's Light Infantry, was the 2nd Admin Battalion of Cornwall Rifle Volunteers. The battalion had been formed in 1859 and would retain its Rifle Volunteer title until 1880.  From 1908, with the creation of the Territorial Force, the battalion became the 5th Battalion, DCLI.

In Ray Westlake's, Tracing The Rifle Volunteers, he gives the 1880 location of companies in the 2nd VF battalion as follows:

Writing in 1909, Walter Richards, in His Majesty's Territorial Army, gives the company organsiation of the newly created 5th Battalion (by now, reduced to eight companies instead of nine) as:

Five year's later, on the eve of the First World War, the battalion (headquartered at Bodmin) breakdown had changed again:

From this brief snapshot it can be seen that whilst some company locations changed, the locations of A, C and D companies remained the same, at least from 1880 until 1914.  As far as my relative, a St Austell man, was concerned, it looks a good bet that he served with D Company.

My recommended reading for all those interested in the VF and TF would be:

Also have a look at the excellent Drill Hall Project.
No comments: