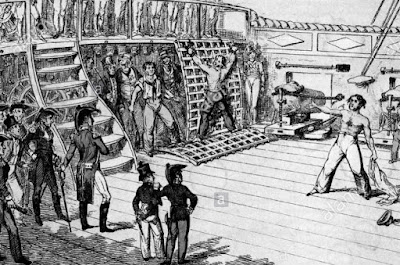 Not army, but I couldn't resist re-publishing this piece on flogging in the Royal Navy in the 1860s. The original article was first published in The Navy & Army Gazette on the 6th July 1901:

Apropos of the paragraph on the sea term “Kissing the Gunner’s Daughter,” a correspondent, Mr Douglas White, writes: “Unfortunately I have witnessed a good many men flogged, and also boys, as I joined the Navy in 1862. All men were flogged across the back, and were tied up to a grating that was lashed to the main rigging and to ring bolts on the quarter-deck, and were naked to the waist. The chief boatswain's mate gave the first dozen and the other boatswain's mates according to seniority. It was called 'facing the Carpenter's looking-glass' as the carpenters rigged the gratings. Boys were the only ones that were flogged over the breech of a gun. The boys' cats had only five tails instead of nine. Before a man was made a boatswain's mate, or as soon as he was, he had to practise flogging in the boatswains' store-room over a hammock lashed up. I saw flogging on board the 'Fisguard,’ the ‘Wellesley,' and any amount of men and boys in the 'Conqueror' in the years 1862-63-64-65. The ‘Conqueror' was paid off at Sheerness at the end of February or the beginning of March, 1866, and I never saw any one flogged after that. I may also say that the term ‘Introduced Io the Blacksmith’s Daughter’ meant being put in irons. I left the Navy in 1887, and was a captain of the maintop and a seaman gunner." 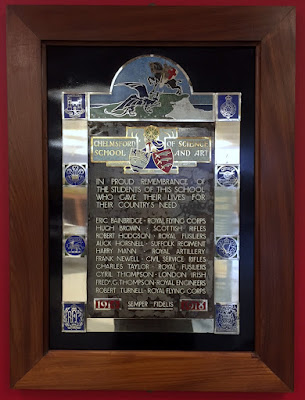 A nice discovery today at the Lord Ashcroft Building library, Anglia Ruskin University in Chelmsford. This memorial was originally unveiled in 1923 and located in the Frederick Chancellor building on Victoria Road South. The building still exists but has been re-purpsoed and will presumably be flats soon, or a gym,

This memorial plaque is really quite lovely and commemorates the following individuals:

A panel next to the memorial gives more information: 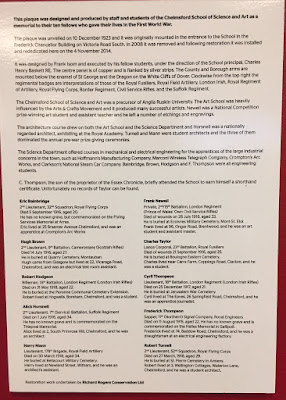 Sufferin' suffragettes! There are FREE records on Findmypast

Findmypast has just published a collection of suffragette records and they're free of charge to registered users. To complement this important rlease, Findmypast is also making its census records and birth marriage and death records freely available as well. But you'll need to hurry!

The suffragette records are FREE until the 8th March but the census and BMD records are only free for a week, until the 8th February. So even if you don't have a suffragette in the family, you'll still be able to find your First World War ancestors in the civil and census records.
No comments: