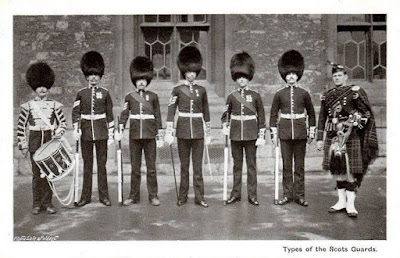 Findmypast has just published over 40,000 entries in Scots Guards enlistment registers covering the period 1799 to 1939.

There are three distinct series covered in the new release: officer enlistments, other rank enlistments, and a roll of officers and men who served during the Second Anglo-South African War (2nd Boer War).

In the example below, extracts from the register entries of 4974 Frederick Munday and 4975 John Adamson who enlisted on the 7th and 10th August 1903 respectively, show the level of information packed into these registers.

Frederick Munday won the Military Medal twice whilst John Adamson received gunshot wounds to his left arm and right thigh on the 14th September 1914. His pension award is recorded on this document. Not shown in this extract are the men's next of kin and, in the case of Frederick Munday, his three children, all of whom will have been indexed and are searchable. The men's place of birth and year of birth have also been indexed.

The regimental number field is currently not populating on the free results' screen but this bug, introduced yesterday, is expected to be fixed by Monday, fingers crossed. In the meantime though, these records are hugely important, filling as they do, gaps left by missing service records. For that matter, look out for more Scots Guards records in 2017.

This latest release means that there are now over 65,000 Scots Guards records on Findmypast - and if you click on that last link you'll be able to see them all.


Contact me if you need help with your military ancestor.
3 comments: 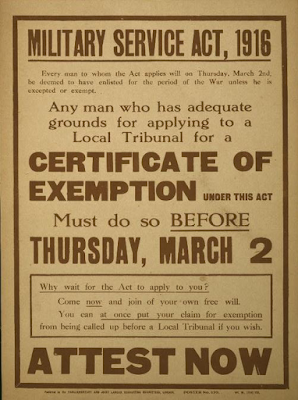 Here's a link to proceedings from  military tribunals 1916-1918 which are published on Findmypast. I think these are fascinating and I'd' love to see more of them.  Surviving books are few and far between because they were supposed to be destroyed.  Thankfully there were those who disregarded the instruction.

Findmypast has published records for Northamptonshire (transcriptions only), Surrey and Poplar; over twenty-eight thousand records in total, although some names appear many times, the result of multiple appeals either by the man or by the employer on behalf of a man.

So as you can see, there's a lot of infromation there. For men whose applications were refused, cross-check their names on military records such as First World War medal index cards, First World War campaign medal rolls and of course First World War service and pension records (all 4.3m of them). 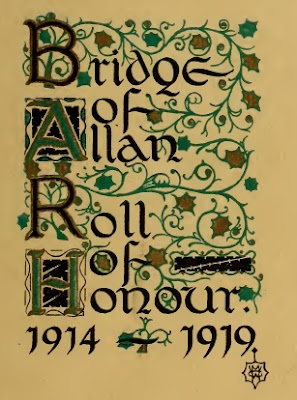 Bridge of Allan is a twon just north of Stirling in Scotland; not a large town by amy means and smaller still in 1914. And yet there are 444 names on this roll of honour. It was originally published in alphabetical order, making no distinction between those who were killed or died on active service, and those who served.  In the list below, I have ordered this by those who died, followed by those who served.


I research soldiers!
Contact me if you need help with your military ancestor. 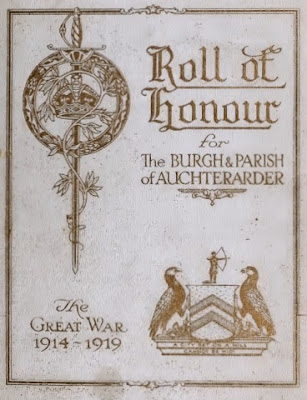 This is a transcription of the roll of honour for the burgh and parish of Auchterarder in Perth and Kinross. There are 610 names in the following lists which are broken down as follows:

The foreword is published below: 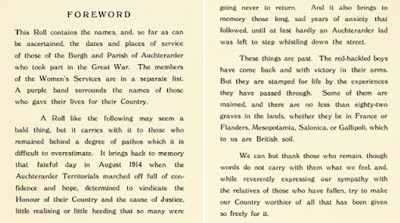 Here is the transcribed roll from the original publication:

Their Name Liveth for Evermore