Prisoner of War interview reports in WO 161 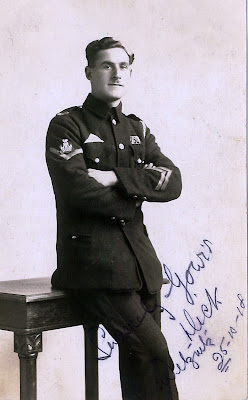 The Committee on the Treatment of British Prisoners of War conducted over 3,000 interviews with British and Empire PoWs before the Armistice was signed in November 1918 and these make absolutely fascinating reading. Over the past couple of weeks, I've been going through the list of men and updating my own database of Princess Mary tin PoWs, extracts from which I've been publishing on my Army Service Numbers 1881-1918 blog.

Whilst a service record will give you the bare bones of a man's military history, these reports tell you far more about the man and of course, far more about the conditions under which he was held. What you have here, in fact, is really the makings of a very compelling book on British PoWs during the First World War.

The National Archives has had these reports published on its site for quite a while, but you can now also view these on Findmypast as part of its general Prisoners of War 1715-1945 collection.

The WO 161 series is comprised of six very distinct interview groupings which I detail below. I also thought it would be helpful to publish the questions that the interviewers asked the men they met. There were two enquiry sheets used: one which concerned treatment in hospital and one which concerned treatment in camps. Here they are. Images are Crown Copyright, The National Archives: 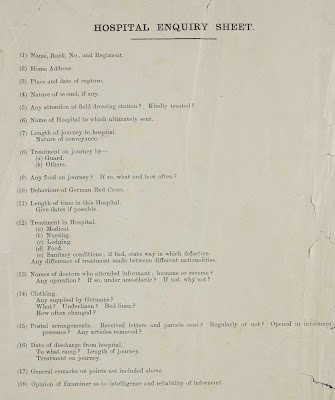 WO 161/95 (112 results) and WO 161/96 (202 results) are interviews with officers. WO 161/97 (89 results) is interviews with medical officers, and WO 161/98 (707 results), WO 161/99 (264 results) and WO 161/100 (1,964 results) are interviews with other ranks. Clicking on each of these links will take you to the results on Findmypast BUT, as usual, you will need a subscription or pay per view credits to actually read the reports. To view the whole collection of WO 161 prisoner of war interview reports just click on the link. Once you're into the database you can then start playing around with the filters. I was interested in WO 161 prisoner of war interviews with men captured in 1914 and so I filtered on year of capture and just restricted the search results to 1914 Prisoners of War.  As with most things in this life, it's easy once you know how.

The one big regret I have is that there are a number of interviews which were conducted but never published and I live in hope that one day the original interview transcripts will be found because then I'll be able to see what my old mate Charles Sabourin (below) had to say. Charles was wounded at Mons on the 23rd August 1914 and was a repatriated prisoner of war in early 1915. He was certainly still bitter when, probably less than a year after he'd been wounded, he wrote in Nurse Oliver's autograph book.

Also worth noting is that some of the reports mention other prisoners of war by name and these men have not been indexed. Another of my future tasks is to go through the 1914 men's accounts and spot other named PoWs so that I can update my database accordingly.