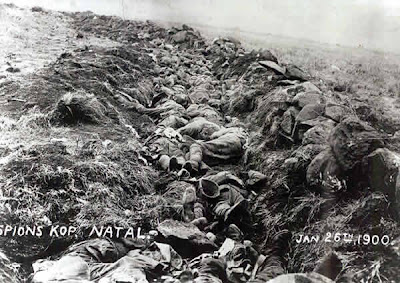 Ancestry has recently added a new data set: Casualties of the Boer War 1899-1902 In Ancestry's words: This data collection contains the following information on over 65,000 soldiers who either died or were wounded during the Boer War: Force Regiment Battalion Battery/Corps Rank Name Casualty type, date, and place For example: South Africa Field Source, Staff, 3rd Brigade, Major-Genl. MacDonald H., C.B., D.S.O. wounded in Paardeberg on 18/02/1902. The data, which is taken from official casualty rolls, is sortable on First Name, Last Name, Place of casualty / Year of casualty, Regiment and Keywords but unfortunately is only available as part of Ancestry's premium or worldwide membership schemes.
Another useful source for Second South African War information is The Boer War Register which presents "over 258,700 entries... [including] a fully revised and corrected casualty roll of over 59,000 records." Also see The Anglo Boer War and The National Archives's page on the South African War. Finally, it's always worth running a keyword search at the Internet Archive for military archive material. Type in Royal Fusiliers and you get a number of very useful lists including this listing of recipients of the Queen's South Africa Medal. The image on this post shows British casualties at Spion Kop in January 1900.