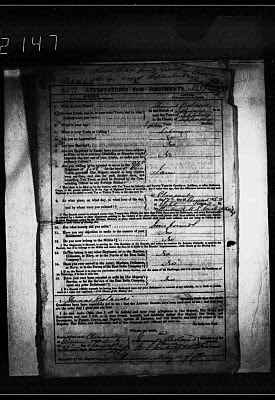 It's worth remembering that whilst Find My Past has the Chelsea Pensioners' records - that is, records of British Army Other Ranks discharged to pension between 1760 and 1913 - there are still plenty of pre WW1 records in the WO 363 and WO 364 series over at Ancestry

. Even if your ancestor did not serve during WW1 therefore, but may have served prior to WW1, it's certainly worth running a name check on Ancestry

- and also being a little sceptical about Ancestry's often far-from-accurate transcriptions.

The earliest record I've found in WO 364 is for Thomas Boland of Tipperary who joined Her Majesty's 94th Regiment of Foot at 8am on the 17th August 1850 at Clonmel, and who swore allegiance to the crown three hours later. Thomas later transferred to the 43rd Regiment of Foot and was discharged on the 28th March 1866 aged 33 years and seven months, having served a total of 15 years and 110m days.

However, and this is a big however, if you'd keyed in Thomas's estimated birth year, or indeed his enlistment date into the Ancestry search engine, you'd be sorely disappointed. Ancestry

lists his estimated birth year as 1867 and his enlistment date as 1885.

Email ThisBlogThis!Share to TwitterShare to FacebookShare to Pinterest
Labels: Ancestry, Army Ancestry, Find My Past