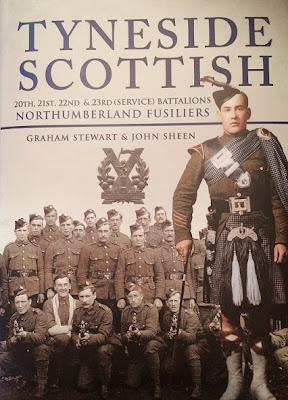 It's great to see Graham Stewart's and John Sheen's Tyneside Scottish re-printed by Pen & Sword in this new edition. This is a weighty tome, written by experts. It's also packed with information, including nominal rolls, and at £30 for a little over 402 pages is probably fairly priced. You will of course be able to get it cheaper than this, and Pen & Sword, for one, is currently offering a £10 discount HERE.
The book tells the story of the formation and, in some cases, the decimation of the 20th, 21st, 22nd and 23rd Battalions of the Northumberland Fusiliers, better known simply as The Tyneside Scottish. The story is told, as is usual (and sensible) in this series in chronological order so that we get some background on the area the men came from, the recruiting, training and finally service overseas. There's a very interesting appendix on some of the physical defects encountered in the men on, or shortly after, attestation, and as with all the books in this series, the pages are well illustrated.
As I said at the start, it's great to see this book re-printed, and in an easier to handle format. If I have one complaint it is that the rolls are so small that you almost need a magnifying glass to read them. Rather than re-keying the information - and I can understand that this would be a daunting a task - the rolls have simply been copied across from the former format. The original pages were a good deal larger and the rolls worked. Here, in this new addition, they are incredibly difficult to read, which is a shame.
Nevertheless, rolls aside, this is a great book and an essential addition to those books, many of these published in recent years, which have brought Britain's volunteer army of 1914 back to life.