There are some cracking publications dealing with army and navy life in Queen Victoria's army, and one of the best - in my opinion - was The Navy and Army Illustrated. First published in 1895 in fortnightly and later weekly instalments, these journals are packed with interesting articles and great photos.
As is suggested by the title, the publication gave equal weighting to the army and the navy. I have a number of original copies, including some still in their advertising wrappers, and also digital copies of the first seven volumes, courtesy of Your Old Books and Maps. If you're quick you can grab yourself a 50% discount and pick up all seven volumes for under twenty quid. Use the discount code YOBMOCT2015 at the checkout but be quick. This offer expires at the end of October.
Issue I, Volume I, published on the 20th December 1895 includes this great article by Lieutenant-Colonel F C Turner, late Recruiting Staff Officer of the London Recruiting District. The article sets the tone both for the quality of articles and photographs that would be published in future editions.
RECRUITING FOR THE ARMY
St George's Barracks, Charing Cross, the Depot of the London Recruiting District, is by far our most important centre of Army recruiting. Of course, a great number of recruits are obtained annually through Regimental Depots throughout the country, but as a matter of fact, when a man wants to enlist, he generally leaves his district to do so, the Territorial system notwithstanding. About one quarter of the recruits for the whole Army are actually enlisted at St. George's Barracks, and a considerable proportion of the remainder at Woolwich, Hounslow, and other neighbouring centres.
The machinery at Charing Cross for everything connected with recruiting is, of course, very complete, and attached to the barracks there is a contingent of special recruiters, a number of whom are daily in evidence within a few hundred yards of St. Martin's Church. These men are paid from two and sixpence to five shillings each for every recruit they bring in, the lower sum being the infantry rate while the five shillings is paid for Cavalry, Guards, and Artillery recruits. They get as much as from £2 to £5 for a Life Guardsman. Amongst Londoners the Cavalry, Highlanders (or Scotch Highlanders as the London recruit calls them) and the Rifle Brigade are in particular demand, the hardest recruits to get being those for Garrison Artillery, for which men of exceptional physique are required, while the branch is not particularly popular. With recruits for the Royal Engineers a special course is taken, as they have to be tested in their knowledge of a trade. There are certain workshops in London where this testing is undertaken for a fee, and as, even when a man has undergone this test he may still be rejected at Chatham; it will be seen that it requires genuine knowledge of a trade to become a Royal Engineer. In the case of the Royal Engineer, too, a certificate of character is required, and the same qualification is necessary in regard to the Army Service Corps and the Medical Staff Corps. But-with the line or cavalry recruit, provided there is nothing of a suspicious nature about him, such as a recruiting officer of experience can generally detect at a glance, a character is not considered a sine qua noti.

A good deal is heard from time to time about "special enlistments", that is, of undersized lads who promise to fill out to the required development. Personally, I am in favor of these, for the simple reason, that by taking these "growing lads" you secure recruits of a much better class than you can if you decline to take anyone under a hard and fast standard of measurement. I may mention, too, that many cavalry commanding officers have declared that these "specials" often turn out the best soldiers they have. In London the general rule as regards admitting recruits who do not come exactly up to the standard, is that they should make up in some way for their actual deficiencies. Thus, if a man is under height, he must have a specially good chest measurement, if his chest measurement is not quite what it should be, then both his height and weight must be fully satisfactory. My own rule has been always to attach importance to weight, and in the course of a long and varied experience, both in London and in the country, I have never passed a man whose weight was not what it should be, taking age and other circumstances into consideration. 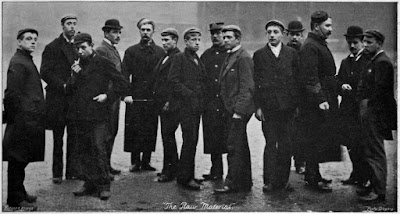 The greatest drawback to recruiting in this country is undoubtedly the British mother. The average British lad has certainly no repugnance to the Army, and the average British father has very little objection to his son's becoming a soldier, or at any rate to his remaining one if he has already enlisted. But to the British mother—of the lower middle class more especially—it seems to come as a positive blow to find that her boy has not done the great things she expected him to do, and has, as she thinks, sunk to the level of a mere recruit. It seems to her such a terrible waste of the good education which the lad has had given him, and which ought to have produced such infinitely better results. The British mother, accordingly does her best to discourage military ambition, and when her son has taken the matter into his own hands and enlisted in spite of her, she will often try hard to get the lad back to civil life. When I was in charge at St. George's Barracks, I repeatedly had two and three mothers in one day making tearful enquiries after their sons, and begging me to help them to get a discharge. My advice in such cases invariably is, that the lad, if physically fit, should be allowed to give the Service a fair trial. In any case if he sickens of it he can be bought out for £10 within three months, with the certainty that he will never attempt the experiment a second time, while the chances are that if the youngster is worth anything at all, the Army will soon make a real man of him. I have known many cases in which parents have eventually been glad to admit the soundness of this advice and have come to be very proud of their smart soldier sons. 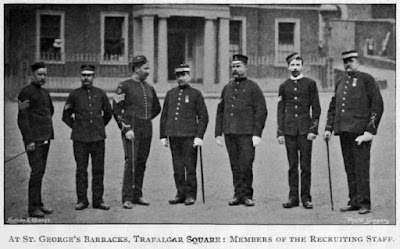 There is no question as to the improvement of late years in recruiting for the Army. Nor is there any doubt as to why this improvement has taken place. The condition of the soldier is altogether different from what it used to be, and the treatment he now receives throughout is whole service is wonderfully kind and considerate. Better food, better opportunities of recreation, a better system even of canteen management, are all advantages calculated to draw young fellows to the Service, that so much is being done to provide reservists and discharged soldiers with employment in civil life, and to remove the scandal caused by reservists tramping from union to union, the prospects of recruiting will continue to improve year by year.

But even now, I repeat, the British Army has little difficulty in getting recruits, and getting them, too, of the right quality.