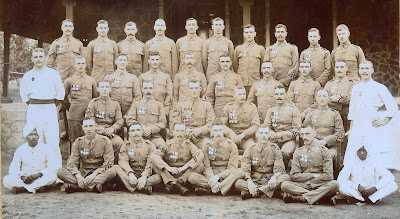 This rather nice photo shows men of the 1st Battalion, Queen's (Royal West Surrey Regiment) in India in about 1907. This belongs to a larger collection I bought earlier in the year relating to the service of 8374 Pte George Anderson who had enlisted with the regiment in May 1905.  There are a number of photos that came with his medals - and those of his son, Lewis Robert Anderson - and as a result of studying these photographs, I believe George Anderson to be the man in the back row, fifth from left.

"To be a member of the Army Temperance Association, a man had to sign the pledge and contribute four annas a month to the funds, which gave him the use of the ATA room, where there were a number of newspapers and magazines not to be found in the Library. Members who kept their pledge were entitled to ATA medals. One was awarded after six months, and I believe they continued to be dealt out at yearly intervals, but a man would have to be back in civil life before he could appear in public wearing these certificates of unnatural behaviour. [Obviously not true, judging by the photo on this page].

"Every six months the members elected a new barman and secretary, who were each paid £2 a month out of funds. These were coveted posts because if an additional £20 or £30 a month could not be made between the two of them, and a handsome profit still shown, this meant either perfect incompetence or, what was less likely, perfect honesty. A percentage of the profit shown was sent to the headquarters of the ATA, the remainder was spent on card tournaments, dances and concerts.

"I knew about the money side of the business from one barman who, during the time he was on the job, often held cheerful card parties in his bunk after eleven o'clock at night: they were made cheerful by the whiskey and soda which he provided for the party. He was very fond of whiskey and soda, though the staunchest of teetotallers in other respects. Tea, which we called "char", mineral water, cake and bread and butter were sold at the ATA. The main profit was made out of the char, which was sold at two annas a pint. Genuine bun-punchers or char-wallahs, as they were called, would drink char all day: summer and winter they drank it. The Prayer-wallah often said that if the bodies of the ATA men who had died in India from causes known or unknown were to be assembled in one grave, the finest tea-garden in the world would soon sprout up from between their bones."

Group photographs like this are helpful because they can help you work out when a man might have enlisted. George's three temperance medals indicate that he must have been a member of the Army Temperance Association for at least two years but there are men in this photo who must have joined up a good deal earlier. The gymnastics sergeant instructor on the left, below, has medals denoting nine years' abstention whilst his colleague - who also wears the medal ribbon of the Queen's South Africa Medal - has medals which are certificates of five years' abstention. 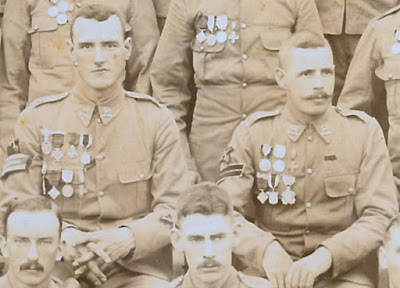 Some of these medals can be seen in the photo below. This particular collection was sold at auction by Dix Noonan Webb in February 2016 (photo courtesy of DNW) and have just now re-appeared on the Aberdeen Medals site: 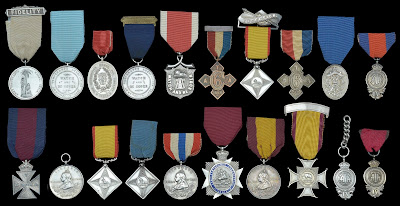 My guess would be that George's six month and one year medals are for the Army Temperance Home Organisation, whilst his two year medal is certainly the commemorative Queen Victoria medal which was issued in India and which appears fifth from left in the image above.

George also appears in all ( I am guessing) of the photos below. The first one dates to Aden in 1909 and a football match against a team from HMS Perseus. 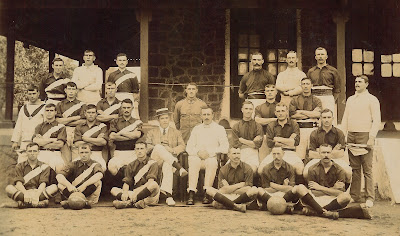 The photo below is undated . 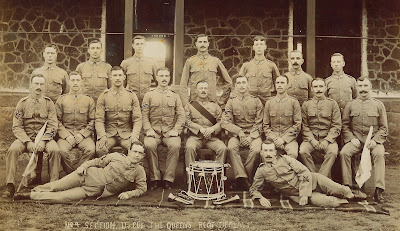 The photograph below presumably dates to George's time with the Army Ordnance Corps after he had transferred out of the Queen's. 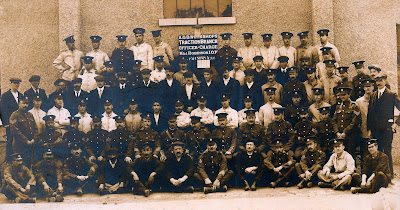 This last photograph may ne a good deal later, and perhaps George is one of the men by the vehicles. 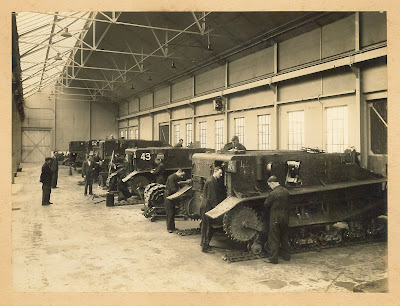 Apart from his temperance medals, George Anderson went on to serve with the Queen's in 1914, earning a 1914 Star trio (with clasp). His son would also later serve as a regular with the Gordon Highlnders and would die in 1943 as a prisoner of war of the Japanese whilst working on the Burma-Siam railway.

I research soldiers. Contact me if you need help.