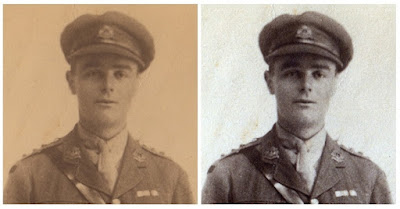 Last month, I wrote a post on this blog called Finding a photo of your military ancestor. In that post I suggested that it was a good idea, as well as searching for photos yourself, to - as it were - get the photo to find you by creating a website or a blog asking for information. I had had success with this myself and, to illustrate this, had posted a photo sent to me of one of my Chailey 1914-1918 research subjects.

Last week, I was contacted by a gentleman - the term is entirely appropriate - who had recently won an auction on eBay. The auction he'd won had been titled "WW1 Officer Bedfordshire Regiment MC Military Cross 1915 Star medal ribbon" and showed a slightly larger than postcard-size full portrait of the Bedfordshire Regiment officer. A head and shoulders crop from that full-length photograph appears at the top of this post. That officer is my great grandmother's nephew, Alfred Eldred Iliffe, and the successful bidder on this item contacted me after his own online research found an earlier post of mine on my British Army Medals blog, requesting information about him. 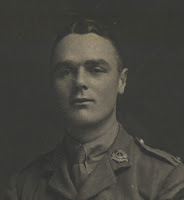 In that post I had published a photo of Alfred (above) under the heading "A/Capt Alfred Eldred Iliffe MC, Bedfordshire Regiment. I wrote, "Alfred Iliffe went to the Balkans in 1915 as 1630 Pte A E Iliffe with the 1/1 Suffolk Yeomanry. He was later commissioned into the Bedfordshire Regiment and would win the MC in 1918. I seek his 1915 Star (Suffolk Yeo), his British War and Victory Medals (Beds Regt) and his Military Cross."

As the successful bidder wrote to me, he had found my 2009 blog post as a result of a simple Google search: "... it is quite frankly a miracle that I was able to make the connection, having only searched 'Bedfordshire Regt Captain MC' into Google images and finding your blog photo within the first dozen images!" I am indebted to him for both contacting me and for offering to part with his recent purchase. I am so grateful - and also somewhat relieved that he was the high bidder on this photograph.

So the moral of the story is that publishing requests for information can work. In this case I had to wait eight years, and as I said in my December post, your chances of success may still be remote, but nothing ventured, nothing gained. 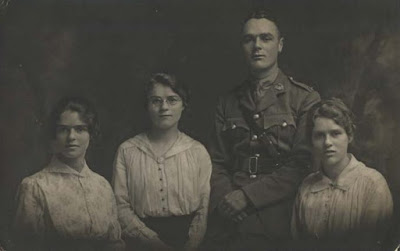 And whilst I am it, let me add some more information about Alfred Eldred Iliffe and his family. The portrait of him that I originally posted was cropped from a family portrait of Alf with his three sisters in July 1917. From left to right they are Queenie Ethel Louisa Iliffe (1890-1977), Freda Grace Iliffe (b.1900), Alfred Eldred Iliffe (1894-1961) and Margaret Elsie Iliffe (b.1898). A fifth sibling, Samuel William Iliffe (1892-1916) had died the previous year. I have a separate photograph of Samuel which I will publish on another post. 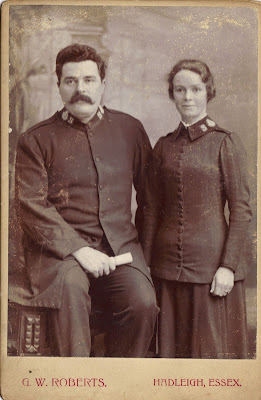 The siblings' parents were William Henry Iliffe (1867-1938) and Margaret Franklin (1865-1933). Margaret, was the elder sister of my maternal great grandmother, Anne Roberts (1875-1952). The Iliffe family were committed Salvation Army members and both Queenie and Samuel had been born in India when their parents were working there in the early 1890s as missionaries. The photograph above shows William and Margaret in their Salvation Army uniform, photographed at Hadleigh in Essex where there had been a thriving Salvation Army farm colony since 1892. It is possible, but unproven as yet, that William had returned from India in order to take charge of this colony. He was certainly back in the UK by December 1892, the Dorking Advertiser, published on the 3rd December, reporting on a talk given by him and helpfully mentioning that for the last five years Captain Iliffe had been "labouring in Ceylon, Madras, Bombay and other parts of India."

The final photograph that I have of the Iliffe family shows a Salvation Army wedding group on the occasion of Queenie's marriage to Walter Rendall in 1917. Again, the internet helped me to identify members of the Rendall family when, many years ago, I connected with a descendant via GenesReunited. 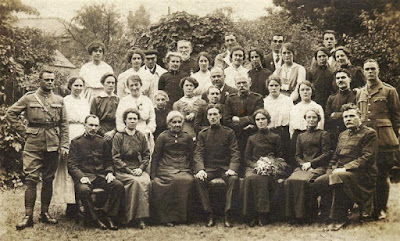 It goes without saying, of course, that I am still keen to connect with anyone who has information on, photographs of (or medals of) anyone featured in this post. In concluding, I would also like to publicly thank again, the successful eBay auction bidder who contacted me and subsequently sent me the photograph of Alfred Iliffe MC.