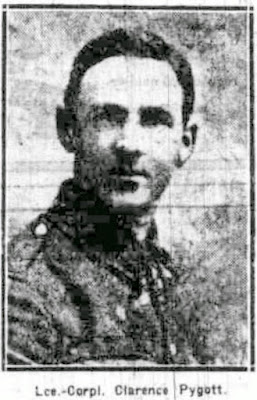 Thirty-one years ago I met and interviewed a veteran of the 1/4th Lincolnshire Regiment, Donald Banks. You can read transcripts of my interview with him on my World War 1 Veterans' blog by clicking on the link on Donald's name. As a sixteen-year old, Donald was badly wounded at Lake Zillebeke on the 2nd September 1915 when the dug-out he was in received a direct hit. His friend, Clarence Pygott, and other 1/4th Lincolnshire Regiment men besides, were killed when the shell landed, and Donald was temporarily blinded.  As Mr Banks told me,

"I carried a bible in my pocket and there was a certain Lance-Corporal Pygott with whom I formed a friendly association and he saw me take this out and said, “let me have a look at it” and he opened it at the text of one of St Paul’s epistles, “For I am persuaded that neither death nor life, nor angels nor principalities, nor powers, nor things present, nor things to come, nor height nor depth, nor any other creature, shall be able to separate us from the love of God, which is in Christ Jesus our Lord.” Romans VIII, 38-39."

After Clarence Pygott was killed next to him, Donald Banks wrote a small In Memoriam piece in his diary and, some years after I had interviewed him, I visited Pygott's grave at the Railway Dugouts Burial Ground near Ypres and recited the verse from ROMANS. He lies buried next to Sergeant Preston and other Lincolnshire men killed that day.

Today, in anticipation of meeting Donald Banks' grandson in a couple of weeks' time, I decided to search the British Newspaper Archive to see if there was any mention of Clarence in a newspaper roll of honour.  What I found, in The Lincolnshire Chronicle on Saturday 18th September 1915, far exceeded my expectations.  Not only was there an article but also photos of Clarence and an older brother. The article reads:

News of the death of Lce-Corpl Clarence Pygott was received with much regret by his many Lincoln friends this week. Lce-Corpl Pygott, whose home was at 20 Grafton Street, Lincoln was well-known in the West-End of the city and had been in the Territorials three years. When hostilities started he was called up and went to France in February. No official news of his death has, as yet, been received, but the following is the letter from the Major of his regiment, conveying the sad news to Mrs Parkin, sister of deceased:

I am very grieved to have to tell you that your brother was killed on the 2nd September, by a shell whilst in his dug-out. That afternoon we were badly shelled whilst in support. All; was done for the safety of everybody, and it was the luck of war that he was taken. Your only consolation is that he was killed instantaneously. He had only been under me for a short time, so that I can't say that I knew him very well. He is buried alongside his comrades who were killed the same afternoon and not far from the place where he died.

All my sympathy is with you and your in your bereavement.

Prior to mobilisation the deceased worked at Ruston's. The last letter received by his sister was written on the day of his death. In it he said he was going in the trenches that day for five days. 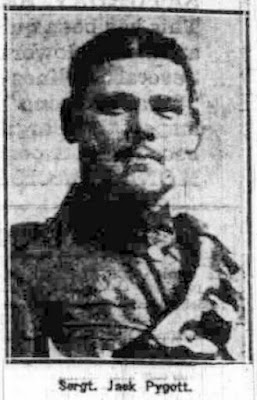 Herewith we also give a photograph of deceased's eldest brother, Sergt Jack Pygott, who is training in England with the Lincs Yeomanry, prior to going to the Dardanelles. He is the husband of Mrs Pygott of Spa Street, Lincoln. He was a member of the old Volunteers, and among those who, under Col Ruston, volunteered for service in Africa. Before enlisting he was employed on the brass gallery at Ruston's. He also possesses a Long Service medal.

There is another brother who is also in the army. He is in the 3/4th Lincolns.

Clarence Pygott was born in Gainsborough, Lincolnshire on the 11th October 1895 but was not baptised until the 25th May 1901. By then, he was living at the home of his elder sister, Amelia Parkin; the Mrs Parkin referred to in the letter above. Clarence's father, George Henry Pygott, had died in 1898 at the age of 47 and his mother, Annie Pygott, may have re-married or also died. I have been unable to find a trace of her.

Amelia and her new husband (they had married in 1897) took in six of the Pygott siblings and they all appear together on the 1901 census. Some of these older children were probably Clarence's half-siblings. His mother is recorded as Annie on his baptism certificate but on the 1891 census return (below) it is Mary A Pygott who is recorded as the wife of George Henry.

The family address in 1901 was 10 Britannia Terrace, Gainsborough. Amelia and Herbert Parkin must have lived there at least since 1899 as Clarence appears on an admission register for Gainsborough Holy Trinity school that year and it is this home address which is given.

I could find no entry for Clarence Pygott in the Soldiers' Effects Register although I presume his next of kin would have been Amelia Parkin. She would have been sent Clarence's medals and, in due course, a memorial plaque and scroll. If anyone knows of the whereabouts of these, assuming they are not held by the family, I would be happy to purchase them.