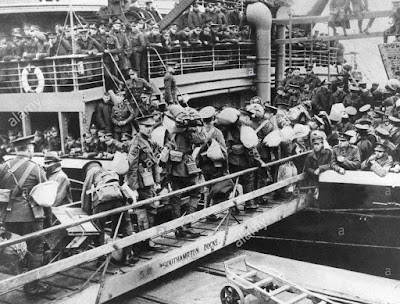 I was looking through the war diary for the 1st Battalion, Argyll & Sutherland Highlanders earlier today, and came across some fascinating detail concerning the battalion's embarkation from Southampton in December 1914.

The 1st Battalion had been stationed in Dinapore, India in August 1914 and didn't arrive back in the UK until the 17th November 1914. It was one of the units recalled from the British Empire's far-flung outposts and was assigned to the 81st Brigade in the newly-formed 27th Division. The embarkation notes and table in the battalion war diary give a fascinating insight into the way in which troops were organised.

I suppose I'd never thought about how the actual embarkation would have been organised, but of course it makes perfect sense to have allocated serial numbers to units and to mark up everything with those numbers. The four infantry battalions in the 81st Brigade were the 1st A&S Highlanders, the 1st Gloucestershire Regiment, the 2nd Cameron Highlanders, and the 1st Royal Scots, and again it is interesting to note that they each sailed on different ships, presumably a cautionary measure to guard against an entire brigade being sent to the bottom of the English Channel by a German U-Boat.

The extract above, whilst included in the War Diary for the 1st A&S Highlanders, also includes similar levels of detail for other brigades; as I say, completely fascinating.

I was checking the war diaries on the Naval & Military Archive which offers access to millions of records and over 4.500 individual war diaries for as little as £10. Photo above, showing British troops embarking at Southampton in 1915, is from the Alamy website.