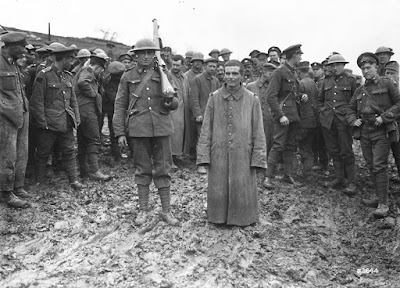 I've just completed a research project and was struck by the following passage in the battalion diary which covers the actions during which my research subject was killed.

Thus was success measured in April 1917. The extract is from the war diary of the 6th Royal Irish Regiment on the 5th April 1917 and I've manipulated the information somewhat because after "successful undertaking" the diarist had written, "21 prisoners of the 4th Grenadier Regiment, from whom inestimable information was gained."

We must take the diarist at his words and hope that it was of some comfort to the relatives of those who died that day. My research subject was one of the seven men missing. His body was never found and he is commemorated by name on the Menin Gate Memorial at Ypres.

The image comes from the Vimy Foundation website and shows Canadian soldiers from the 78th (Winnipeg Grenadiers) surrounding a rather forlorn looking German captured during a trench raid.