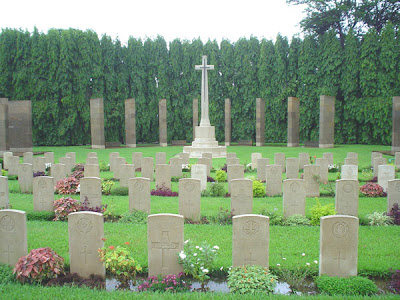 I've started another blog; this time commemorating the dead of WW2.

The Second World War has never held the fascination for me that the First World War does. Maybe that has something to do with the fact that my relatives were mostly Great War era veterans rather than Second War. My childhood was peppered with anecdotes of the horrors of the trenches rather than atrocities in Burma, or heroism at Dunkirk. But this week has marked the seventieth anniversary of the outbreak of World War Two and so on 3rd September 2009, 70 years to the day that Britain went to war against Germany for the second time that century, I started a WW2 Remembrance blog and like the WW1 Remembrance blog I'll be updating that daily.

I've also started a site for military books, an attempt to draw together publishers under one roof, and again highlighting British military involvement in conflict since 1800. The Military History Bookshop is HERE.

And whilst on the subject of books, I recently picked up a number of medal reference works which make great companions for the various medal rolls that I hold and which I've used on the British Army Medals site. Medal collecting is an area I've dabbled in, albeit not as much as I would have liked to. That's one hobby that requires deep, deep pockets.

Finally, it's been a busy week again on the military research front; mostly WW1 era but with some interesting Victorian projects spanning the Indian Mutiny and Boer War. Get in touch if you'd like us to help with your own project.

The photo shows a very sodden Kirkee War Cemetery, Pune. I took around four hundred photos there for The War Graves Photographic project a few years ago.