How burnt is burnt? 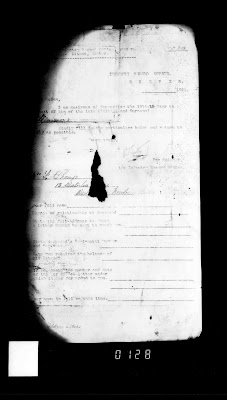 I was adding a WW1 Remembrance post for a man who died on this day in 1914 and I thought it might be an idea to say a few words about the documents held in the WO 363 series at the National Archives. Commonly referred to as the burnt documents, these are the papers that were damaged when the Germans bombed the War Office Record Store at Arnside Street, in London's docklands in September 1940.

The majority of papers stored at Arnside Street were completely destroyed and many of those that survive bear the scars of flame or water from the firemen's hoses. What that means for today's researcher is that if your ancestor's papers haven't been turned to ashes or even singed, the water may have obliterated the content.

Nonetheless, the WO 363 series does contain records of servicemen who died, unlike the WO 364 series which, as a series for pensions awarded to WW1 servicemen is not supposed to. That at least is the theory, but having personally found records for soldiers who died in the WO 364 series, I would suggest that it is always worth checking.