Here's an anomaly: a 1915 attestation within a pension series (WO 97) which supposedly ends in 1913.  David Marshall was 60 years old when he attested with the Rifle Brigade at Hereford on the 14th July 1915.  He had previously seen service with the Rifle Brigade and the 2nd Dorsetshire Regiment and gave his trade as General Labourer.  He was discharged after seven days. 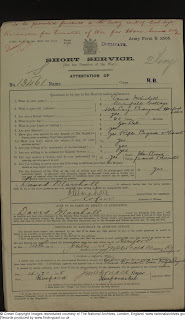 Is this the latest attestation in WO 97?