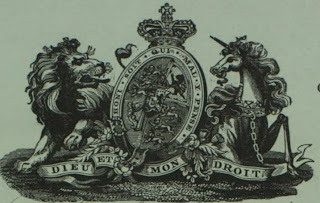 There is some great artwork on early attestation and discharge papers and here's an example from the discharge papers of 131 Private William Nelson of the 74th Regiment of Foot who left His Majesty's Army on the 31st July 1836 after 24 years and 129 days' service which included "7 years and 5 months in North America [and] one year and 8 months in the West Indies". He was discharged at his own request (and in apparently robust health) signing that:
"I perfectly understand , that in receiving my discharge at my own request, I entirely relinquish all Claim to Pension, and that, even if I should re-enlist, my past Services prior to the date of my present Discharge cannot be allowed to reckoned for the purpose of obtaining any benefit from Chelsea Hospital".
Little wonder that the army often struggled to recruit and was consistently below establishment (despite the relaxing of standards in height, weight and chest expansion) throughout the nineteenth century.  Still, the Royal cypher is excellent.