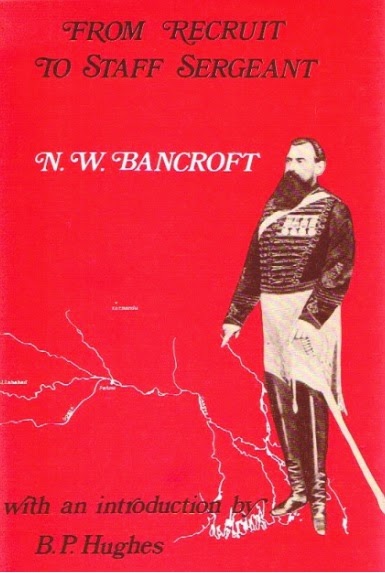 Nathaniel Washington Bancroft served for over 35 years with the Honourable East India Company's Bengal Artillery and latterly the Royal Horse Artillery, taking part in the Sutlej campaign of 1845-6 where he was badly wounded, and later in the Indian Mutiny campaign. Like Edwin Mole of the 14th (King's) Hussars who recorded his army experiences some years later, Bancroft's account is full of fascinating and rich detail about his time in India; something which I personally find fascinating. Like Mole too, Bancroft has numerous records that survive and which have been digitised by Findmypast.  Here are some examples: 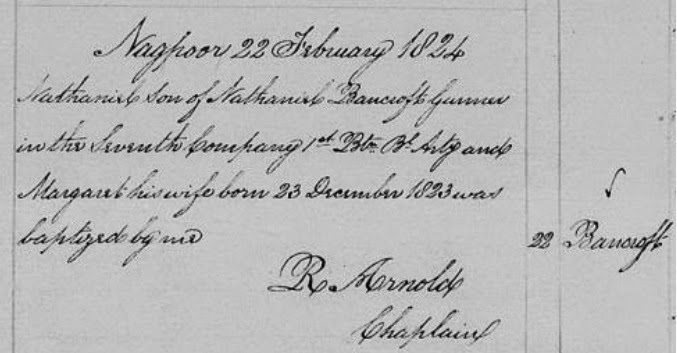 Above, birth and baptism record from the British India Office births and baptisms collection showing that Nathaniel Bancroft's father was also an artilleryman. Image extract copyright of the British Library Board.

Detail from Nathaniel Bancroft's British Army pension record in WO 97. The image is Crown Copyright The National Archives.

Marriage of Nathaniel Bancroft and Mary Ann Nunan at Umballa in 1845. Mary was a widow when Bancroft married her. She very nearly became a widow for a second time when he narrowly missed being fatally struck by cannon balls at Ferozeshah. Image from the British India Office marriages collection; copyright of the British Library Board.

Death of Nathaniel Bancroft at Subathu on the 25th April 1908. He was buried the same day. Image from the British India Office deaths and burials collection copyright of the British Library Board.
It took me no more than ten minutes to find these documents, helped by an unusual name which in turn helps to narrow down the field (other Nathaniel Bancrofts returned in results are either his father or son).
There is plenty more research work that could be done here as well. Who was Mary Ann/Anne Bancroft's first husband? When did she die and what was the cause? Were there other children? Who did Nathaniel Bancroft re-marry? All of these answers will be found within the British India Office collection.  Click on the links above to explore this for yourself - and do buy a copy of Bancroft's very readable memoir, which I started and finished on the daily train commute this week, and which is easily available through abebooks for a few pounds.