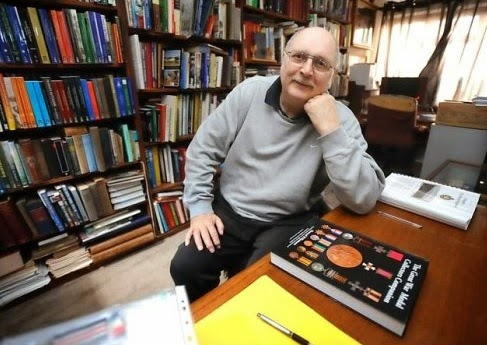 Good old Howard. Here's Volume 3 of The Great War Medal Collectors Companion from one of the good guys - and he knows a thing or two about medals and militaria too. These are well-produced, lavishly illustrated books and jam packed full of information. 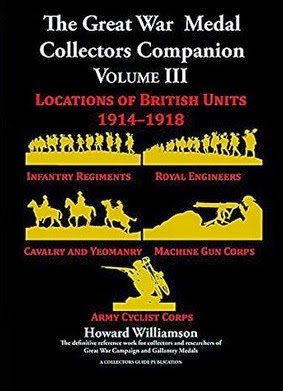 The contents of Volume 3 of The Great War Medal Collectors' Companion are as follows: The First Chapter (Ch 9) gives a short history of the 76 British Army Divisions (plus Cavalry and Guards Divisions) alongside the dates and Battles in which they were engaged (82 pages). The Second Chapter (Ch 10), Locations of British Regiments shows the locations of each battalion of the Line Regiments (plus Guards, Cavalry and Yeomanry Units) throughout the War. Each entry gives Brigade and Division and date of entry to the theatres of war. All changes of Brigade, Division and Theatre of War are noted (200 pages). The Third Chapter (Ch 11) is the OMRS Gold Medal Winning study of the Royal Engineer Units in the Great War. This includes locations, dates, battle honours, refined regimental numbers from Volume II, general duties and many contemporary photographs. An outstanding study (250 pages). The Fourth Chapter (Ch 12) is a study of the Machine Gun Corps in the Great War. It gives all unit locations and the Brigade and Division attached. In addition, there are a number of photographs and a section on the equipment and tactics employed (45 pages). Awarded OMRS Silver Medal 2014. The Fifth Chapter (Ch 13) is a study of the Army Cyclist Corps in the Great War and covers notes on their units, equipment and duties. This study was awarded an OMRS Silver Medal at the 2014 Convention.
These books are essential resources and will be much sought-after in years to come. Naval and Military Press also has copies of Volume 1 and Volume 2. Click on the links on this page to order these essential reference works.