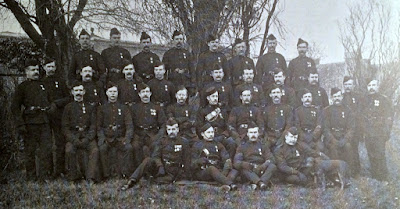 The photograph above originally appeared in the Rifle Brigade Chronicle for 1901. It shows one officer and thirty-one NCOs and men of the Royal Rifle Reserve Regiment who formed the Queen's Guard at Parkhurst in December 1900 and January 1901. Her Majesty, Queen Victoria, died on the 22nd January 1901 and these men were therefore part of the last Queen's Guard.

The Royal Rifle Reserve Regiment, then quartered at Parkhurst, was one of several reserve regiments formed in 1900 of time-expired soldiers. In the case of this last Royal Guard - a complete contingent of two officers and forty-four NCOs and men - all men with the exception of Lieutenant Okeover who had served with the militia, had originally served with the Rifle Brigade. 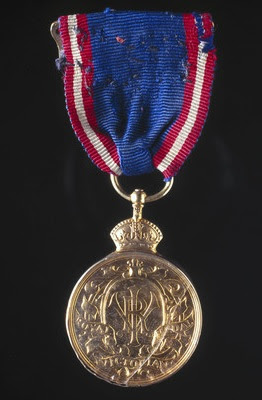 The following men are all named in The Rifle Brigade Chronicle as having formed part of the last Guard of Honour, all of these men being awarded the Royal Victorian Medal (above, courtesy Science & Society) which had been instituted by Queen Victoria in 1896. Their regimental numbers are those of the Royal Rifle Reserve Regiment and date to March 1900.

Surviving Rifle Reserve Regiment records are few and far between and, where they do survive, are not generally held with the man's earlier papers. Nevertheless I did find records in WO 97 for some of the men in the list below, most of whom had left the Rifle Brigade by the early 1890s and were therefore old soldiers in the true sense of the word. Where I have uncovered additional information, I have expanded the man's forename and also added in his previous Rifle Brigade regimental number and years of service. 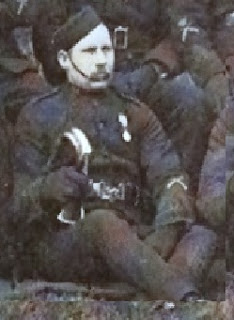 Some of the men listed above with common names may also have surviving service records in WO 97 but it would be impossible to pick them out, particularly as their Royal Rifle Reserve service is almost certainly not indicated on their original papers. That's one of the reasons that published lists such as this, even though it is small, is so important. For some of the men listed above, this single listing in a half-forgotten Chronicle published by the Rifle Brigade over 100 years ago may be the only surviving evidence of their army service.

Apart from the Royal Victorian Medal, five men wear the India General Service Medal 1854-1895. Clasps are visible on some of these medals and these are almost certainly the clasps for Burma 1885-7 and Burma 1887-89, as illustrated below. The corporal sitting on the ground on the left wears the Sudan Medal and Khedive's Star, evidence of campaigning between 1882 and 1889. 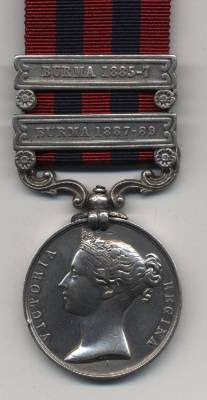 Ernest Martindale is one of the India General Service Medal holders although he was only entitled to the clasp for Burma 1887-89. He later re-enlisted in the Rifle Brigade in 1914 at the age of 48 and saw service in the UK with the 15th Battalion before being discharged in 1915. John Pitchford served in Gibraltar, Egypt, South Africa and India during his original stint with the Rifle Brigade but still came away with no campaign medals; a case of being in the wrong location at the wrong time.