Colchester in the Great War - Review 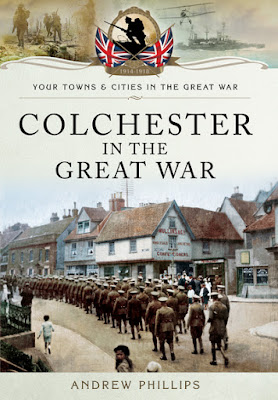 Colchester in the Great War, by local author Andrew Phillips, is certainly one of the better books in this particular Pen & Sword series. For a start, having already published eight books about Colchester and its history, the author knows his stuff and has almost certainly drawn on those earlier accounts in this new publication. He also tells a good story and writes engagingly and informatively about the town. I lived in Colchester for a while and have family who still live there, but the vast majority of what Andrew Phillips writes about was certainly news to me, and fascinating news at that.

Above all though, Mr Phillips never loses sight of the town; how the town was situated before the war, the effect the war had on ordinary lives, and the aftermath. At least 1250 local men died during the conflict and whilst the author pays tribute to them, this book is not essentially about the players but rather the stage from where they sprung, and to where the survivors limped back home afterwards.

As is customary with the books in this series, Colchester in the Great war is well illustrated and even includes a photograph, I was interested to note, that I owned some years ago; a photo of the unveiling of the impressive war memorial outside the equally impressive castle.

This is a good read and a nice addition to books on Essex generally and Colchester specifically. As a former and current garrison town it is also almost certainly long-overdue.