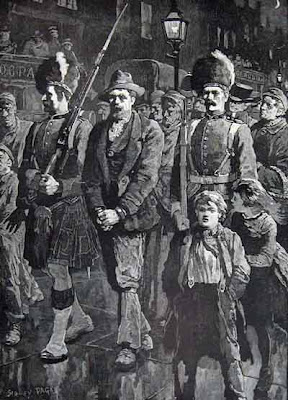 There are some great Army Deserter records over on findmypast; records that make a nice complement to the Chelsea Pensioner records in WO 97.

Thanks to the efforts of the Manchester and Lancashire Family History Society, it's possible to view the details of over 34,000 men who deserted the British Army between 1828 and 1840. At an average of 2,615 desertions per annum over the thirteen years that the database covers, that seems like a lot of men. According to figures published in Alan Ramsay Skelley's The Victorian Army at Home (Croom Helm, London, 1977) however, those numbers are par for the course.  In 1862, 2,895 men deserted (1.4 per cent of the British Army as a whole) and over the next thirty-six years, the figure never dropped below that 1862 level and in fact rose as high as 5,861 in 1872; 3.2 per cent of the British Army.

There are plenty of service records in WO 97, and in fact in the WO 363 and WO 364 series for the First World War which show men having deserted.  Many of these men however, were recaptured or returned of their own free will and went on to lead distinguished careers.  I have noticed during my own research, that most soldiers who did desert, often did so within the first year (and sometimes even days or weeks) of joining.  As Skelley suggests, talking about the number of soldiers of the Home Army in prison:

"... younger soldiers were more prone to commit offences or at least were more likely to be caught for doing so, than older, more experienced men who by the time they had served six or seven years would have beome accustomed to the demands of military life, would have had the maturity to cope with the demands and might have achieved greater responsibility and greater freedom with promotion."

Deserters, when caught, could expect to be flogged or branded.  Although flogging was later restricted by the Mutiny Act of 1868 to active service and to certain offences committed while under sentence in military prisons, and later still (1881, the Army Discipline and Regulation Act) restricted to military prisons only, it wasn't until 1906 that corporal punishment in military prisons was abolished altogether.

The image below, taken from the Army Deserters 1828-40 data on findmypast shows you the type of information you can expect to find.  The image at the top of this post dates to 1884 and shows a deserter having been apprehended. 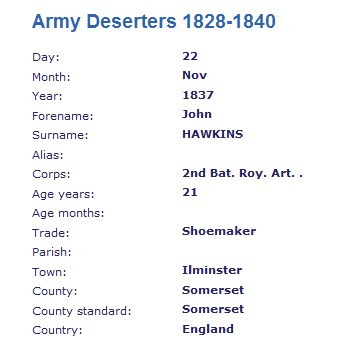