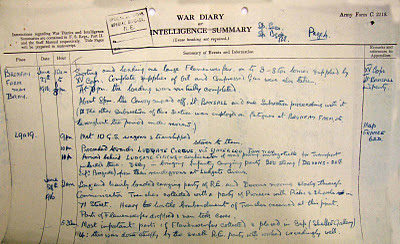 An email yesterday from the Federation of Family History Societies begins:

"The National Archives is looking for volunteers to help ensure that the pages within a popular record series (unit war diaries from the First World War, catalogue reference WO 95) are in the correct order before a conservation and digitisation project begins."

This is great news. When I was at TNA a decade ago, some of the war diaries were in a shocking state and in need of conservation even then. Not only were they being pored over by thousands of researchers, but the photocopying assistants employed by TNA were also extremely heavy-handed at times. In fact I often used to think that the silent stewards who pad through the reading rooms at TNA reminding you not to breathe too heavily on the archive, would have been better employed reprimanding their colleagues in the photocopying room.

I can't imagine that the digitisation project is one which Ancestry would be interested in, so assume that this is an in-house project for TNA and will augment the war diaries that they already have online.