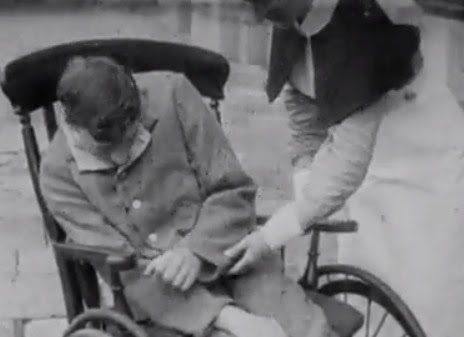 Findmypast has just released patient admission registers and casebooks from the Bethlem Hospital in London. The records cover the years 1683-1932 and there are many admissions of soldiers or former soldiers who served in the First World War and were admitted suffering from shell-shock.

I have only started skimming the surface of these records but whilst doing so I also uncovered the records for a VAD nurse, Joanna Anderson, who had served at 55 General Hospital and who was admitted with neurasthenia in May 1918. How many shell-shocked men and women have casebook notes in this depressing collection of nearly 250,000 records it is impossible to say, but don't rule the Bethlem records out if your ancestor served in the First World War; particularly if they were diagnosed with neurasthenia or shell-shock.

The image on this page comes from archive film footage of shell-shocked patients recuperating at Netley Military Hospital. I've borrowed the image from the World War 1 Centenary archive which also has links to the original film footage.