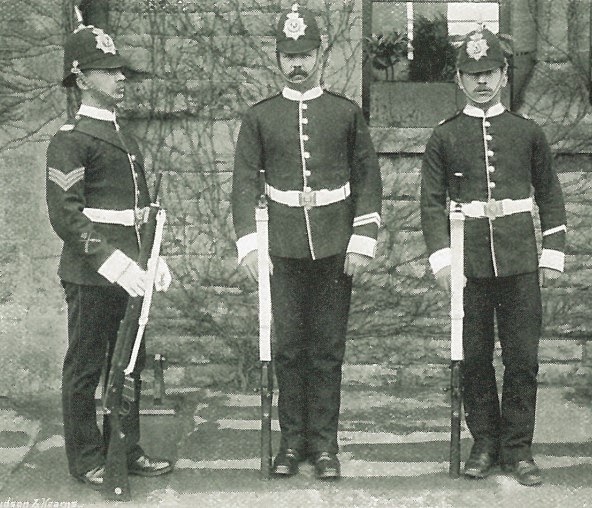 When a soldier joined the army he entered into a contract, the terms of that contract stated on the attestation papers that were signed by the soldier.  In this post I want to explain in a little more detail, some commonly used terms and some variations to terms of service that were current in Great Britain's late Victorian army.


Colours and Reserve
The period of service with the Colours was the time that the man spent, in service dress, actively serving his regiment. Typically, infantry of the line enlisted for a 12-year term, these 12 years being a combination of time (usually seven years) spent with Colours, and the balance (usually five years) spent on the Army Reserve. This was known as Short Service, although it was also possible to enlist for 12 years' service with the Colours only, and this was known as Long Service.
In the example above, the man is joining the Hampshire Regiment for a period of seven years with the Colours and five years on the Reserve, although note that if serving overseas, this period of service with the Colours would be extended to eight years, and the period on the Reserve reduced to four years. This particular attestation form is Army Form B.265 and by the time this edition of it was printed in a print-run of 100,000 in November 1900, there had been 34 earlier versions.  Note that the particular version of this form has been amended to exclude cavalry and Army Service Corps. Men wishing to join these corps would have attested using a different form.

When a man was transferred to the Reserve he was still paid by the army but effectively he was back on civvy street and could engage in civil employment. He still had a commitment to the army and, in the event of a Proclamation of War from His/Her Majesty, he would be recalled to the Colours. In such circumstances, and as laid out in the attestation paper, he would be obliged to “serve in Army Service for a further period not exceeding 12 months"; that is to say, 12 months on top of the 12 years, making thirteen years in total.  This condition is also found in Territorial Force attestations. Reservists’ papers were held at the regimental depot from which they had been discharged and to which they would report in the event of recall to the Colours.

Extension of service
Men could extend their period of service with the Colours, instead of passing into the Reserve, provided they were of good character.  This is commonly seen on attestation papers.


Re-engagement of Service
Re-engagement means a man’s further engagement with the British Army for a period of service beyond the original 12 years. This agreement was only extended to men whom were of good character and conduct. Warrant officers, sergeants and corporals could choose to re-engage after 9 years, privates, drummers, trumpeters and buglers after 11 years.


Conversion of Service
There was provision in the Army for men to convert their service; that is, reduce the term of service with the Colours and extend their period on the Reserve. There were a number of conditions that had to be met in order for conversion of service to be considered. Men had to be in possession of at least one good conduct badge and have had five years’ service. They had to have civil employment lined up and furthermore, had to have a good excuse for wanting to convert their service in the first place. Indeed, if the soldier’s release into civil employment was the only way of preventing an elderly parent from being condemned to the workhouse, the minimum five-year term of service was usually waived.


Re-transfer from the Reserve
This was the option of allowing a reservist to re-join the Colours; an option that was rarely exercised and one which had to be considered by army headquarters.
Re-enlistment
Soldiers who had served previously, except those discharged for misconduct or on medical grounds were allowed to re-enlist up to the age of 28 years.


Discharges
There were many reasons why a man could be discharged from the army. King’s and Queen’s regulations routinely list more than twenty separate qualifying reasons. The majority of men were discharged on termination of their first period of engagement but it is also common to see men discharged because they were no longer physically fit for war service, or men discharged because they were deemed unlikely to become an efficient soldier.  Discharges by purchase were invariably permitted, provided a man was not warned for foreign service, and the cost of purchase varied according to the length of unexpired service. For bandsmen, who had usually received an education in music at the public expense, discharge was generally deferred, while schoolmasters – also educated from the public purse – had to find considerable sums - £50 for instance, in 1893 – to pay for their discharge.
Soldiers who had served three months or less could claim discharge as their right on payment of £10 within that time. Thereafter, discharge was considered an indulgence which had to be sanctioned and accompanied by a payment of £18 if discharged before the completion of 12 years; free if discharged after 12 years. 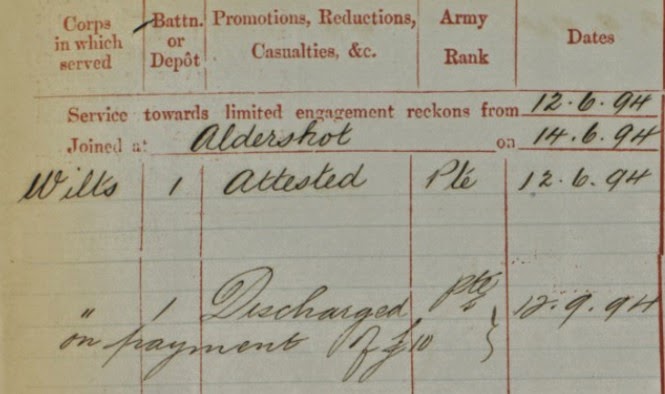 My own paternal great-grandmother's brother, Herbert Hellam, paid £10 in 1894 after three months with the Wiltshire Regiment (above). That was far from the end of his military career however. He re-enlisted for 7&5 with the 20th Hussars less than two years later, subsequently extending his service to 12 years with the Colours. He re-enlisted for a third time when Britain went to war in 1914, serving with the Rifle Brigade, Gloucestershire Regiment and Royal Defence Corps; an old soldier through and through.

Images used on this post are Crown Copyright, The National Archives.