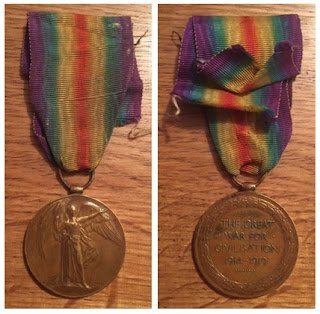 Give me a choice and I'd always take an original ribbon - no matter how tatty, dirty and faded it is -  over a later replacement. I've never particularly rated the Victory Medal, for that matter, but this is one of the nicest examples I've come across and it also has quite a story behind it; far more than I could have imagined it when I bought it at a secondhand market two days ago.

The medal is named to 22158 PTE A E GODSAFE G GDS and would originally have been accompanied by the 1914-15 Star and the British War Medal. This is his story.

Albert Edward Godsafe was born in Latchingdon, Essex in 1884, his birth registered at Maldon in the third quarter of that year (Vol 4a, page 424). He appears on the 1891 (Stanford Rivers) and 1901 (Widford) census returns living with his parents and siblings. His father was an agricultural labourer and, judging by his siblings' places of births, probably moved across the county (and into Kent) seeking work:

In January 1915, with Alice expecting their seventh child, Albert responded to his country's call and volunteered to join the army. Aged 30 years and six months, he attested on the 15th January 1915 and joined at the Grenadier Guards depot in Caterham four days later. In June that year, his daughter, Ethel, was born, and the following month, possibly as a result of complications during the birth of her child, Alice Godsafe died at the Stanford Rivers infirmary.

With Albert in the army, care of the children appears to have been handed to Albert's mother, Eliza. In November 1915 Albert sailed for France and this was almost certainly the last time that he saw his family and that they saw him because on the 25th September 1916, aged 32, he was killed on the Somme whilst serving with the 4th Battalion, Grenadier Guards. Albert has no known grave and is commemorated on the Thiepval Memorial.

In November 1916, Eliza Godsafe completed Army Form B.104-77 which was the "Declaration to be made by the Guardian of the Motherless child or children of a deceased soldier in support of a claim to Pension". In it, Eliza - living at Shalesmore Cottage, Stapleford Tawney - acknowledged that she was the guardian of the six orphaned children, although it is not clear what the final award amounted to. The following year, in the March quarter of that year, baby Ethel Godsafe's death was registered.

Eliza Godsafe received £5, 7 shillings and 10 pence as money owing to her son at the time of his death, and later a war gratuity of £7 and 10 shillings. She died in 1948 at the grand age of 96, having seen her surviving grandchildren make it to adulthood, albeit her grandson Albert, like his father before him, had been killed in a world war.

As well as being remembered at Thiepval, Albert Edward Godsafe's name is also recorded on a memorial tablet at the parish church in Stapleford Tawney, Epping (photo courtesy High County History Group). 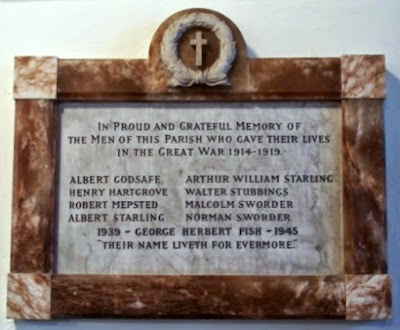